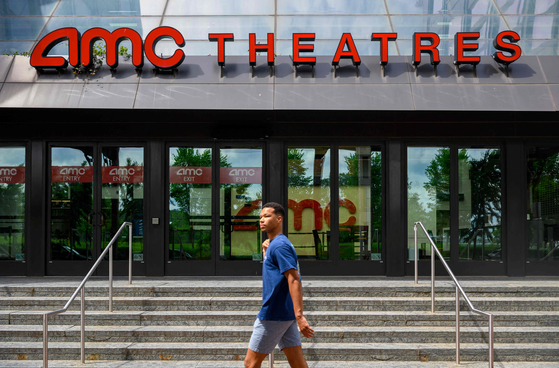 A passerby walks in front of an AMC theater in Washington on June 3. [AFP/YONHAP]

A 33-year-old office worker in Seoul recently sold all the Tesla shares he owned even though he had to take 8 million won ($7,160) in losses. With the proceeds, he purchased 20 million won of AMC Entertainment.

AMC Entertainment, the largest movie theater chain in the world, is the quintessential meme stock. Meme stocks are run up by mobs of retail investors who egg each other on and coordinate via social media.

“I invested in the shares because I have this belief that the price will jump dramatically one day,” He said.

Three of the top five most popular foreign stocks in Korea in terms of transactions are meme stocks. 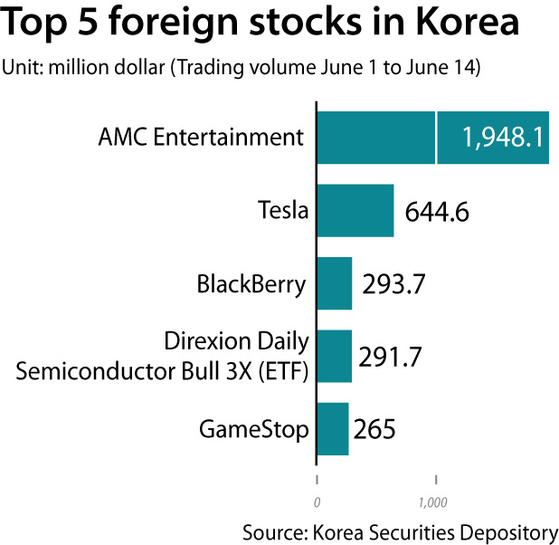 That’s three times the transaction volume of Tesla. Korean investors traded some $645 million of that company during the same period.

BlackBerry was ranked No.3, with $294 million of trading, while GameStop placed in fifth place with $265 million of transactions.

The price of AMC Entertainment shares, which traded around $2 in early January, rose as high was $62.55 on June 2. It slightly declined after that and closed $59.04 on Tuesday, a 2,837 percent increase compared to Jan. 4.

This reminds people of the GameStop case, where retail investors flocked in a coordinated buying spree to punish short sellers by increasing the company’s share price.

High volatility is the one of the reasons why Korean investors purchase foreign stocks. As the U.S. stocks don’t have volatility limits, a share can jump more than 100 percent in just a day. Investors who want to bet big rush to foreign stocks.

“Investors are attracted by foreign stocks as they raise people's expectations that they could hit the jackpot and become rich overnight,” a CEO of an asset management company said in the condition of anonymity. “The Seohak Ants are thinking much like those who invest in cryptocurrencies.”

Risk is a big concern.

Get ready for meme war (KOR)