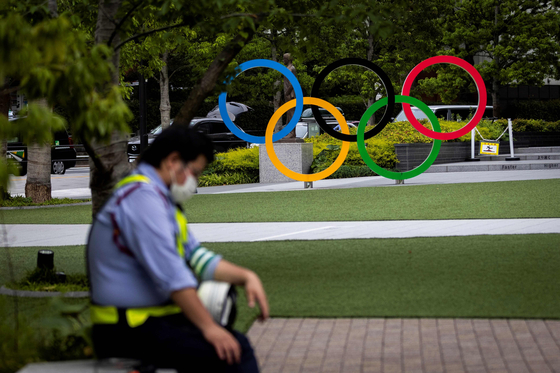 A security guard takes a break in front of the Olympic rings in Tokyo on June 3, 2021. [AFP]


Tokyo dismissed Tuesday a media report that discussions are underway to arrange a visit by President Moon Jae-in to the Tokyo Olympic Games next month.

“It is my understanding that there is no coordination between the two countries on [Moon’s] visit to Japan,” Chief Cabinet Secretary of Japan Katsunobu Kato said Tuesday, dismissing a report by the Yomiuri Shimbun.

The Japanese daily reported earlier Tuesday that Korea approached Japan with a proposal for Moon to visit the Olympic games, which will start July 23. Quoting unnamed sources, the report said Seoul conveyed Moon’s desire to visit Japan through diplomatic channels. Moon's visit was supposed to reciprocate for Japanese Prime Minister Shinzo Abe’s visit to Korea in February 2018 to attend the opening ceremony of the PyeongChang Winter Olympics.

“Seoul hopes to hold the first in-person meeting between Prime Minister Yoshihide Suga and Moon during his visit to Japan, according to the sources,” the English-language report of the daily newspaper said. “However, the Japanese government is cautious about holding the meeting without any prospect that South Korea will offer solutions to the issues of so-called comfort women and the lawsuits filed by former requisitioned workers from the Korean Peninsula, which have caused bilateral relations to deteriorate.”

Moon and Suga had brief contact last week at the Group of Seven summit in the U.K. They exchanged greetings, but had no substantial talks.

“As a neighbor, the Korean government hopes for the success of the Tokyo Olympics,” a senior Foreign Ministry official told reporters. “We are open to high-level exchanges with Japan.”

“I have no comment for now,” said Foreign Ministry spokesman Choi Young-sam on Tuesday.

Choi reiterated that Korea is not considering a boycott of the Tokyo Games to protest Japan's refusal to remove the Dokdo islets from a map on the official Tokyo Summer Olympics website.  Last week, several political heavyweights including from the ruling party demanded a boycott. Choi said Seoul is not considering such a protest.

Headed for the worst