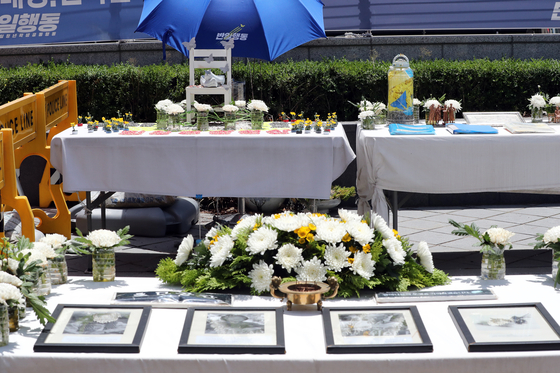 A memorial for deceased comfort women victims is set up near the Japanese Embassy in central Seoul Wednesday during the 1496th weekly rally calling on Japan to properly apologize for its military’s wartime sexual slavery. [NEWS1]


A Seoul district court recently ordered the Japanese government to disclose its assets in Korea as part of efforts to obtain reparations for a dozen victims of wartime sexual slavery.

The victims filed a request for a list of Japan’s assets in Korea in April after the Japanese government refused to comply with a landmark Seoul district court ruling in January ordering it to pay reparations to each of 12 plaintiffs, including the late Bae Chun-hee.

In January, the Seoul Central District Court ruled that the Japanese government must pay 100 million won ($89,000) each to 12 comfort women victims who were forced into sexual slavery by the Imperial Japanese Army during World War II, rejecting Tokyo’s argument of state immunity.

On June 9, Nam Seong-woo, a senior judge of the Seoul Central District Court, ordered the Japanese government to submit a list of assets by a certain deadline.

Nam said that any diplomatic issues that occur as a result of the enforcement of the ruling, such as a deterioration in Korea’s relations with Japan and possible economic retaliation by Tokyo, “is beyond the scope of the judiciary” and should be excluded from consideration when making a legal decision.

The latest ruling also challenged whether the rights of the comfort women victims to individual compensation has expired and whether sovereign immunity under international law was applicable to the case.

This June 9 ruling was the opposite of an April ruling by Kim Yang-ho, a senior judge of the same court, which denied that comfort women victims have the right to claim compensation and the right to enforce them through lawsuits.

On April 21, presiding judge Kim dismissed a case by 20 plaintiffs, citing the principle of sovereign immunity, a legal doctrine that one country cannot be compelled by a domestic court in another country.

In the January ruling, the Seoul court rejected Tokyo’s claim that the case should be dropped based on sovereign immunity, saying that doctrine should not apply to "systematic crimes against humanity" and war crimes.

The Japanese government refused to accept any documents related to the lawsuit, citing Article 13 of The Hague Service Convention, which says a state may refuse to comply with a court service if it deems that compliance would infringe on its sovereignty or security.

The plaintiffs demanded a formal trial in October 2015. The judiciary granted their wish and assigned the case to the Seoul Central District Court in January 2016.

It took years to hold the first hearing of the trial. As the Japanese government refused to participate in the process, the court took an extraordinary measure in January 2020 of “service by public announcement” to start the trial in absentia.

The January ruling concluded a legal battle of more than seven years. Of the 12 plaintiffs, only five are still alive.

Korean courts have flip-flopped on decisions related to compensation of victims of Japan's 1910-45 colonial rule, an issue Tokyo has responded sensitively to.