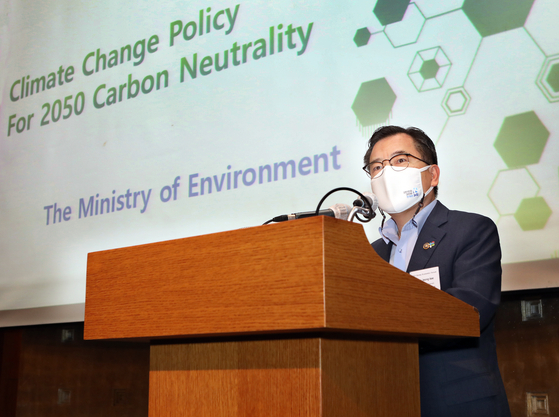 
Korea could raise its nationally determined contribution (NDC) target to at least 37.5 percent by 2030, according to one scenario being reviewed by the government, said Korean Vice Environment Minister Hong Jeong-kee Thursday.

Speaking at the Korea Economic Forum, hosted by the Korea JoongAng Daily Thursday, Hong said that while he could not reveal a specific figure at this point in time, according to a scenario based on 2018 being Korea’s peak for greenhouse gas (GHG) emissions, “around 37.5 percent is proportional to that peak if you draw a line at 2030.”

He added, “Perhaps this can be one reference point” as the Korean government plans to report a more ambitious NDC target to the United Nations within the year.

Korea presented its target for reducing total greenhouse gas emissions by 24.4 percent from its 2017 level to raise its NDC by 2030 in a report to the United Nations last December as a part of its commitment under the Paris Agreement.

In a climate-related summit led by U.S. President Joe Biden in April, President Moon Jae-in announced that Korea will further raise its NDC to an amount that will be revealed at the 26th United Nations Climate Change Conference (COP26) in Glasgow, Scotland, in November.

The NDC target will be decided considering 2050 carbon-neutrality scenarios, sectoral mitigation potentials, stakeholders’ acceptability and the NDC targets of major economies, according to Hong.

Hong was responding to a question asked by Danish Ambassador to Seoul Einar Jensen on “how far” Korea will go in its NDC targets.

Denmark has committed to reach 70 percent below its 1990 emissions by 2030, and Jensen said Korea is “moving in the right direction” but urged it to “do more.”

After reaching its peak emissions in 2018, Korea has reduced emissions more than 10 percent over the following two years.

Hong noted that Korea was at a “disadvantage” compared to other places including the European Union, where greenhouse gas emissions peaked earlier and are already in decline.

Hong stressed that Korea is working on various scenarios “taking into account international trends and different stakeholders’ views to generate societal conversation and gather opinions across agencies,” especially taking into consideration that there is less than a decade left until 2030.

The minister said that once Korea sets its NDC, it will also be reflected in its legislation and emissions trading scheme (ETS).

This plan stresses adaptation to the decarbonization of the economic structure, opportunities in creating a new ecosystem of low-carbon industries, fairness in the transition to net-zero and the strengthening of institutional foundations towards such targets. A government task force to enforce this plan was launched the same month.

Korea also recently pledged to end all public financing for new coal-fired power plants overseas and hosted its first multinational leaders’ conference on the environment, the P4G Seoul Summit, at the end of last month.

Hong warned that Korea’s lukewarm response to carbon neutrality “may deal a significant blow to key domestic industries, such as steel and petrochemicals, which will adversely affect the national economy.”

The European Union is set to announce its new carbon border adjustment mechanism, a tariff on imported goods based on their carbon content next month, and the United States and other countries are reviewing similar carbon border taxes, which could negatively impact exports and financing of Korea’s major industries.

Hong said that that the government is working to help industries to develop innovative technologies and focus on investments in research and development to brace for such fallout, “to ensure the smooth and timely transition" toward net zero.

“The most important aspect in order to achieve carbon neutrality is technological innovation, and businesses are not able to carry out their ideas with their efforts alone: the government, National Assembly and industries must work hand-in-hand,” said Hong.

The government as a part of its strategy for new technological development plans to designate key sectors to prioritize investment and promote green financing, along the lines of what is being requested by industries. Such plans to reduce emissions from industrial processes include hydrogen reduction in steelmaking and the recycling of raw materials as a part of its so-called circular economy scheme, or a system that does not dispose of consumed resources but puts them back into the economy.

Hong noted that there are five bills related to climate response being deliberated in the National Assembly that will provide the legal framework for carbon neutrality.

He said, “It is possible to realize carbon neutrality, economic growth and an improvement of quality of life simultaneously if we take pre-emptive measures such as a bold low-carbon transition of the industrial structure and fostering new innovative technologies.”

When asked if Korea had a specific timeline to phase out diesel vehicles, Hong said that while a deadline has not been set by the government, under its 2050 carbon-neutrality plan, Korea is seeking to expanding its eco-friendly modes of transportation including electric and hydrogen-powered vehicles, a core part of its transportation sector strategy.