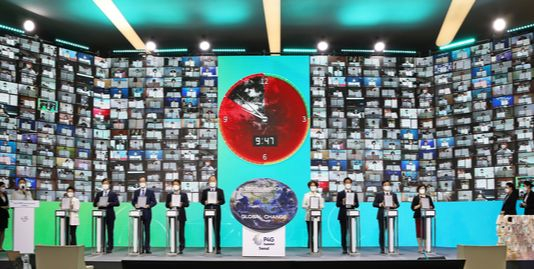 In the second P4G Summit, held both in-person and virtually at Dongdaemun Design Plaza (DDP) in Jung District, central Seoul, some 60 heads of state and leaders of international organizations, as well as CEOs, investors, academics and opinion leaders will discuss inclusive green recovery as the world aims to be carbon neutral by 2050.

P4G, or Partnering for Green Growth and the Global Goals 2030, is a global initiative that seeks solutions for climate action through innovative public-private partnerships and aims to deliver on the UN Sustainable Development Goals (SDGs) and the Paris Agreement on climate change.

The theme of this year's summit is: "Inclusive Green Recovery towards Carbon Neutrality." There will be five overarching thematic sessions on core sectors covered by the SDGs: water, energy, food and agriculture, cities and the "circular economy."

It will be the first-ever multilateral summit on the environment hosted by the Korean government.

Korea last year declared its target to go carbon neutral by 2050, pushing its Green New Deal initiative aiming to accelerate the transition towards a low carbon and green economy.

This marks the first year in which countries begin to take action for the implementation of the Paris Agreement, a legally-binding international treaty on climate change adopted in 2015, which aims to substantially reduce global greenhouse gas emissions by 2030. The climate accord aims to limit global warming to below 2 degrees Celsius, preferably to 1.5 degrees, compared to pre-industrial levels.

The P4G Summit was originally scheduled for last year but was postponed because of the Covid-19 pandemic. It comes at a timely moment amid a series of major climate-related forums this year. The P4G Summit is expected to be a stepping stone to the 26th session of the Conference of the Parties to the United Nations Framework Convention on Climate Change, or COP26 summit, to be held in Glasgow, Scotland, in November where signatories to the Paris Agreement will come together to review the progress made on the climate accord.

The inaugural P4G Summit was held in Copenhagen, Denmark in October 2018, where the participants highlighted the need for accelerated climate action through the leadership of governments, businesses and civil societies.

There are 12 countries in the P4G: Bangladesh, Chile, Colombia, Denmark, Ethiopia, Indonesia, Kenya, Mexico, the Netherlands, South Africa, Vietnam and Korea. It partners with five organizations, including the Global Green Growth Institution, and over 240 global businesses and civic groups.

President Moon Jae-in will kick off the summit in the opening ceremony Sunday afternoon immediately followed by a leaders' session in the evening.

In this session, heads of state and chiefs of international organizations will deliver remarks on inclusive green recovery from Covid-19, efforts of the international community to achieve carbon neutrality by 2050 and strengthening climate action by facilitating public-private partnership.

The leaders will adopt the Seoul Declaration as an outcome of the summit, expected to highlight green recovery and set out global goals and commitments in response to climate change.

The conference will close with remarks from Moon and President Iván Duque of Colombia, the next host country of the P4G Summit in 2023. 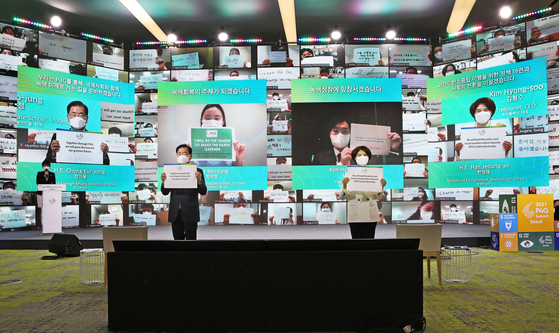 Korean Foreign Minister Chung Eui-young, left, and Environment Minister Han Jeoung-ae hold up messages on climate change, joined by hundreds of participants from around the world, at the opening ceremony of the Green Future Week at the Dongdaemun Design Plaza in central Seoul Monday, ahead of the P4G Seoul Summit. [PARK SANG-MOON]


Leading up to the summit, all 243 heads of Korean local governments declared carbon neutrality for 2050 at the launch of the Green Future Week last Monday.

"Carbon neutrality is the most important issue for the global community, and this is something we need to address in an urgent manner," said Environment Minister Han Jeoung-ae in a special session on carbon neutrality. "As major countries declared carbon neutrality, the Korean government announced the same ambition at the end of last year to join this effort."

She added that cutting emissions "requires a grand transformation of our entire society," stressing local governments' role in a transition from fossil fuels to clean energy, ambitious technological innovations and a fundamental change in industrial structures in order to "save energy and resources in all places including homes and offices and put into practice ecofriendly lifestyles."

The five thematic sessions, each lasting 2.5 hours and held on May 31, will each include panels moderated by the Washington-based P4G Global Hub.

The Environment Ministry will host a session on "Carbon-Neutral Water Management for Climate Resilience" scheduled from 1 p.m. to 3:30 p.m. Sunday, addressing the issue of water security amid the recent frequency of water-related disasters such as flooding and droughts.

They are expected to share the latest solutions for carbon-neutral smart water management, contributing to enhancing climate resilience and achieving sustainable development and focusing on the applications of innovative technologies to reduce carbon emissions. Good governance is another key factor for smart water management, along with finance and insurance, essential to make affordable innovative water solutions.

The Environment Ministry will also host a session on "Circular Economy Measures towards a Zero Waste Society" held from 4 p.m. to 6:30 p.m. to share the latest efforts and innovations in circular economy, a system that does not dispose of consumed resources but puts them back into the economy, taking place in different countries and sectors.

The dialogue with representatives of government, industry, and civil societies aims to develop strategies to go carbon neutral by 2050 and strengthen a global circular economy network. Panelists will share innovative models like sustainable industrial clusters to achieve circularity and a net-zero future.

Building a circular economy is also vital for the implementation of the SDG goal to ensure sustainable consumption and production patterns, which calls for achieving sustainable management and efficient use of natural resources and significantly reducing waste generation through prevention, reduction, recycling and reuse.

Korea has also included the circular economy as one of ten core tasks for its 2050 Carbon Neutral Strategy as it aims for a carbon neutral and sustainable economic model, shifting away from the existing linear economy.

Denmark's Environment Minister Lea Wermelin and Rolph Payet, the United Nation's executive secretary of the Basel, Rotterdam and Stockholm Convention and Seychelles' former environment minister are among keynote speakers at the session.

Jane Goodall, the zoologist, narrated a message prompting climate action through the P4G's music video, "We need to get together now," directed by Jang Min-seung, that has already attracted over 167,000 views on the summit's YouTube channel.

All sessions will be streamed on the P4G Seoul Summit Virtual Venue website and its official YouTube channel.