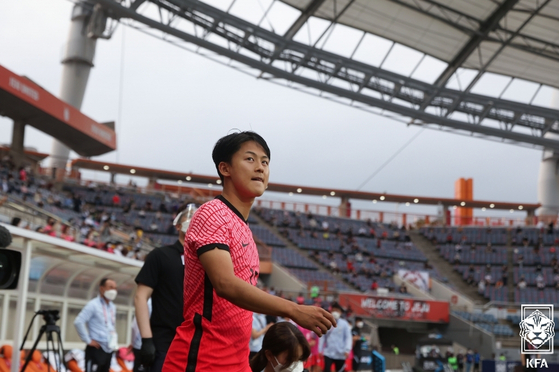 
Lee Seung-woo and Paik Seung-ho were both dropped from the U-23 Olympic football team yesterday after failing to impress head coach Kim Hak-bum in two tune-up games against Ghana in the past week.

The decision to drop the two former Barcelona prospects comes as a shock, as they remain two of Korea's most recognizable U-23 players.

Kim called up 23 players for the second round of training scheduled to begin on June 22 at the National Football Center in Paju, Gyeonggi.

After this second round of training, Kim will need to submit the final entry of 18 players including three wildcards by June 30, and the finalized team will play another friendly against an undetermined opponent in mid-July.

At the first training camp that started on May 31, 28 players were called up and trained in preparation for two friendlies against Ghana last week, during which Kim was seen with pen and paper, constantly watching the players and taking notes.

He made it clear throughout training that nobody, regardless of which club they play for or how famous they may be, are guaranteed a spot on the Olympic team.

Lee is a former child prodigy who joined Barcelona's youth academy as a teenager. In 2017, he moved to Italian club Hellas Verona, making it on the short list of Korean players to appear in the top-flight Italian league.

Lee has made 11 appearances for the Taeguk Warriors, including at the 2018 World Cup, even while regularly appearing for the younger age-capped squads.

For the U-23 team, Lee has made six appearances, most of them at the 2018 Asian Games, where he scored four goals and Korea won a gold medal, also earning him a military exemption.

Yet despite his successful youth, Lee's playing time in Europe had been decreasing for some time and he has appeared in only four matches since being loaned to Portuguese side Portimonense, and always as a substitute.

His performance in both matches against Ghana was unimpressive, and not at all representative of his considerable experience on the international stage. Lee achieved little in 30 minutes on the field against Ghana, although he was at the receiving end of a foul that sent the African side down to 10 men.

The other big name not to make the list is Jeonbuk Hyundai Motors' Paik.

Paik, a midfielder that came up through the Barcelona youth system before playing in the Spanish and German second divisions, joined the K league 1 club on April 11.

Since his transfer, he has played seven fixtures in Korea with the Jeonbuk team before officially joining the U-23 squad for training.

Having sat out on the first friendly, Paik tried coming out strong early on in the second game, pulling out several midrange shots but failing to convert, and apparently failing to impress Kim. 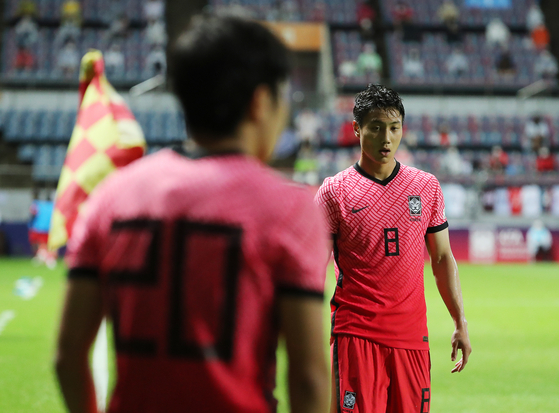 Paik Seung-ho, right, waits for Lee Kang-in to make a corner kick during a pre-Olympic friendly against Ghana at Jeju World Cup Stadium in Seogwipo, Jeju on Tuesday. [NEWS1]


The current 23-man roster includes Valencia's Lee Kang-in and Seoul E-Land FC's Lee Sang-min, who scored the first goal against Ghana, but Pohang Steelers Lee Seung-mo and Gimchun Sangmu FC's Cho Gue-sung, who scored the two other goals in the first 3-1 win, were excluded from the list.

Freiburg midfielder Jeong Woo-yeong, who scored the first goal in the second friendly, and Ulsan Hyundai winger Lee Dong-jun, who scored the winning goal, will be training at the National Football Center starting Tuesday.

The decision to cut the goal-scoring duo, as well as Lee and Paik, may be related to Kim's as-yet unannounced wildcard picks, likely to include some big scorers like Son Heung-min, Hwang Ui-jo and Kwon Chang-hoon, and potentially the defense prowess of Kim Min-jae.