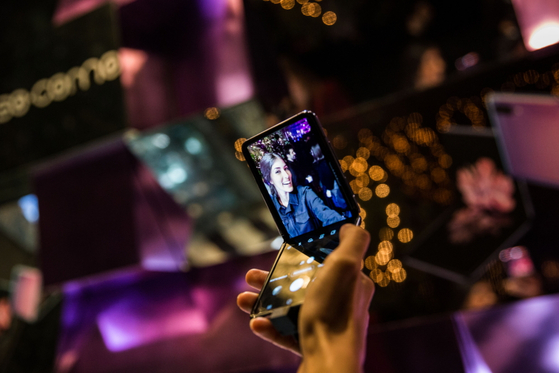 
In Korea, Galaxy smartphones are sometimes called ajae phones, a nickname that presumably irks the marketing department at Samsung Electronics.

Ajae means middle-aged man, and the name has stuck because so many who fit this description use the phone, especially when compared to the iPhone.

The demographics appear universal according to data from various countries comparing operating systems used in phones--iOS for iPhones and Android for Galaxy.

Perception is everything for smartphone makers, so whether the ajae nicknaming makes any sense, if it sticks, Samsung Electronics could lose the all-important sales with image-conscious young people.

Last year, the phrase ajae phone found its way to Roh Tae-moon, president and head of the mobile communications business at Samsung Electronics.

At an online meeting to bring together executives and employees – especially those in their 20s and 30s- one employee asked to Roh how Samsung Electronics could rid its devices of the ajae phone image.

Roh said that the company is prioritizing improvements that would help attract young people born between the late 1990s and early 2010s to their Galaxy phones.

Samsung Electronics is counting on its foldable models to bring in design-conscious young consumers, marketing them as fashion items with eye-catching colors and design.

Phones for mom and daddy?

In a survey conducted by Gallup Korea earlier this month, 79 percent of the respondents in their 40s said they use Galaxy smartphones, while 11 percent used iPhones.

For those in their 50s, 77 percent used Galaxy phones. Only 5 percent answered they use iPhones.

Many Galaxy users in that age group say that their phones provide essential functions like calling, texting and web-browsing at affordable prices.

“I don’t even consider other options because I only need a limited set of basic functions,” said Kim Dae-sik, a 52-year-old man living in Busan and a user of a Galaxy A series model.

“Samsung just provides them at relatively cheap prices and with great after-sales service,” he said.

“It feels like that the ratio of iPhone versus Galaxy users among my friends is 7:3,” said Hong Yoon-jae, a 21-year-old college student.

Asked if he considers Galaxy as an “ajae phone,” he said that “My friends and I sometimes tease someone who uses Galaxy models, but we only mean it as a joke and don’t really think the person is old-fashioned or something.”

Broken down by gender, women users have a stronger preference for the iPhone.
Sixty two percent of female respondents between 18 and 29 currently use iPhones, but only 42 percent of their male counterparts went for the handset, according to the survey of 947 respondents.

Some Galaxy users interviewed cite the functions that iPhone lacks as the reason for their decision.

“I found Samsung Pay extremely convenient and will stay with Galaxy models supporting the payment system,” said Lee Daniel, a 35-year old man who switched to Z Flip 2 last year after using iPhones for six years. Apple Pay is not available in Korea.

“The two brands have differing strengths,” he said, “iPhones have great cameras and its own ecosystem that runs across other Apple products while Samsung phones are compatible with a wider range of devices.” 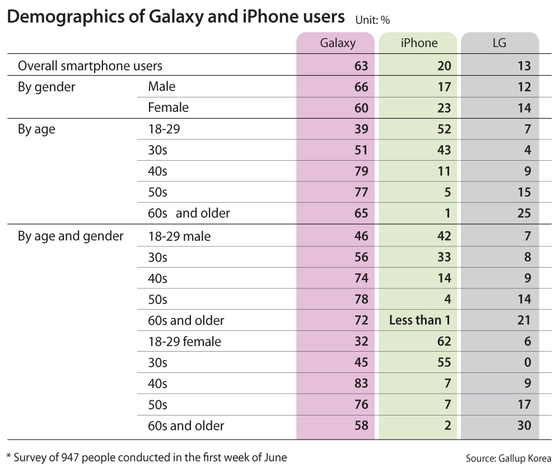 Samsung Electronics is betting that its folding phones, its newest form factor, are well-positioned to appeal to the user groups in which it trails, including younger women.

Of the two lines – Galaxy Z Fold and Z Flip - the clamshell style Z Flip has a higher proportion of female users in their 20s and 30s, according to a spokesperson at the company.

“We can’t release specific numbers, but I can say the main user group of Z Flip is women in their 20s and 30s unlike other Galaxy models,” the spokesperson said.

Samsung showcased the Z Flip 2 at major fashion weeks in New York and Milan last year in a move to have their latest release exposed to trendy young consumers.

“The design of the device was inspired by fashion items like compact foundation cases and pocket-sized wallets to give the device a fashionable touch,” said Kim Cha-gyum from the product marketing team at Samsung’s smartphone division.