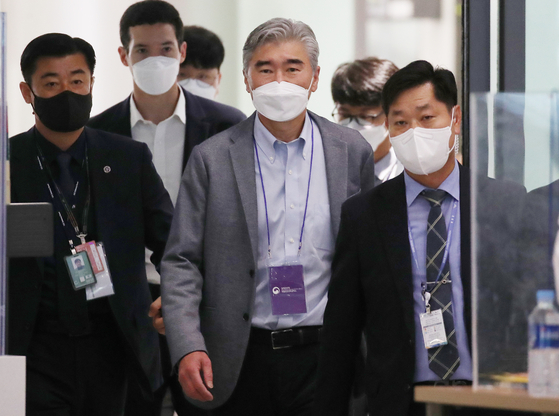 Sung Kim, center, the new U.S. special representative for North Korea, arrives at Incheon International Airport Saturday for a five-day trip to Seoul. He will hold talks with his South Korean and Japanese counterparts Monday. [NEWS1]


North Korean leader Kim Jong-un signaled he is ready for “both dialogue and confrontation” on the eve of a visit by the new U.S. nuclear envoy to Seoul.

Sung Kim, the U.S. special representative for North Korea, kicked off a five-day trip to Seoul Saturday to hold talks on coordinating strategy to resume diplomacy with Pyongyang. This is Kim’s first visit to Seoul since he took the new post on May 21.

On Monday, Kim is scheduled to hold talks with Noh Kyu-duk, Seoul’s special representative for Korean Peninsula peace and security affairs. They will also hold a trilateral meeting with their Japanese counterpart, Takehiro Funakoshi, director-general for Asian and Oceanian affairs, at a hotel in central Seoul.

During the meeting, he also called for “coping with the fast-changing situation” and “concentrating efforts on taking stable control of the situation on the Korean peninsula.”

Special envoy Kim, also the U.S. ambassador to Indonesia, told reporters after arriving at Incheon International Airport Saturday that he is looking forward to "productive meetings" with his South Korean and Japanese counterparts.

Seoul’s Ministry of Foreign Affair said Friday that Kim and Noh will “discuss ways for the two countries to work together to make substantial progress in achieving complete denuclearization and establishing permanent peace on the Korean Peninsula.”

Kim played a role in arranging the first summit between North Korean leader Kim Jong-un and former U.S. President Donald Trump in June 2018 in Singapore. He previously served as U.S. ambassador to Seoul and as a special envoy for the now-defunct six-party talks under the George W. Bush administration.

The U.S. State Department in a statement Thursday said Kim's trip “emphasizes the fundamental importance of U.S.-ROK-Japan trilateral cooperation in working toward complete denuclearization of the Korean Peninsula, protecting our shared security and prosperity, upholding common values, and bolstering the rules-based order.”

They will meet with other senior officials, according to the State Department, and "engage members of academia and civil society” to discuss a U.S policy review on North Korea.

Kim is not believed to have plans to contact North Korea during his visit, but he may have a message for Pyongyang.

The Biden administration completed a review of North Korea policy at the end of April which seeks a “calibrated, practical approach,” a middle ground between the type of “grand bargain” sought by the Donald Trump administration and the so-called strategic patience of the Barack Obama government. It has signaled it is willing to engage Pyongyang diplomatically for the goal of the complete denuclearization of the Korean Peninsula.

Thus, there is interest in what cards Sung Kim may bring to persuade North Korea to return to negotiations. Washington may offer humanitarian assistance that doesn’t conflict with existing international and U.S. sanctions.

He added that the United States is also "actively supportive of humanitarian cooperation with North Korea."

North Korean leader Kim made a rare admission that there is a food shortage in his country in last week’s meeting.

Another area of cooperation could be reunions of families separated during the 1950-53 Korean War, an issue that has been highlighted by U.S. lawmakers addressing the desires of Korean-Americans to meet with their kin in the North.

Three bills related to reunions of Korean-Americans and family members in the North have been proposed in the U.S. Congress, and Secretary of State Antony Blinken on June 7 acknowledged that that it was “heart wrenching” to not “know the fate of their loved ones.”

However, there is a small window of time remaining to resume dialogue, as annual summer military exercises between Seoul and Washington are usually a time of escalated tensions on the Korean Peninsula.

Envoy to UN says Washington is 'picking on' Pyongyang