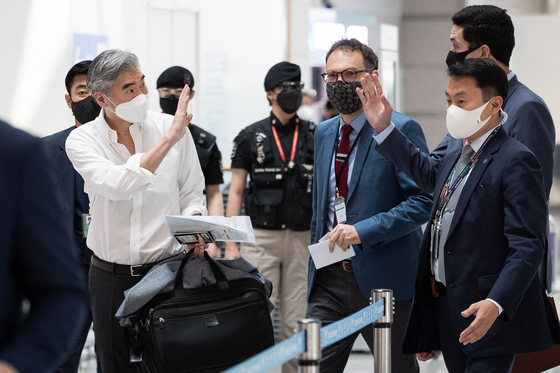 
Despite the North Korean leader's sister throwing cold water on Washington's latest outreach efforts, the U.S. State Department stressed that it still maintains its offer to engage with Pyongyang without preconditions.

Ned Price, State Department spokesman, said in a press briefing Tuesday, “We remain prepared to engage in principled negotiations with the DPRK to deal with the challenge of its nuclear program," referring to the North by its official name, the Democratic People's Republic of Korea.

Kim Yo-jong, the powerful younger sister of Kim Jong-un and vice department director of the Central Committee of the North’s ruling Workers' Party, said in a short statement earlier Tuesday that the United States may be interpreting the current situation the “wrong way,” which would “plunge them into a greater disappointment.”

She pinpointed a remark made by White House National Security Adviser Jake Sullivan who had described leader Kim Jong-un’s orders to prepare for both dialogue and confrontation with the United States the previous week an “interesting signal” in an interview with ABC News Sunday.

Price said he is "aware" of Kim's statement but underscored that "they have not changed our view on diplomacy.”

He also stood by U.S. nuclear envoy Sung Kim’s offer to meet “anywhere, anytime, without preconditions,” made in a meeting in Seoul with his South Korean and Japanese counterparts Monday.

“We continue to hope that the DPRK will respond positively to our outreach, and we will have to wait and see if these comments are followed up with any more direct communication about a potential path forward,” he said.

The Joe Biden administration plans to explore diplomacy “to make progress that above all increases the security of the United States, of our allies, of our deployed forces as well,” Price noted.

He underscored that Washington’s policy is “aimed at solutions,” not “hostility,” toward its goal of “complete denuclearization of the Korean Peninsula.”

Seoul’s Ministry of Foreign Affairs said Tuesday that South Korea and the United States “agreed to consider terminating” their controversial working group on North Korea policy, which has been lambasted by Pyongyang as being a hindrance to inter-Korean ties.

The bilateral consultative body launched in November 2018 to coordinate Seoul and Washington’s approaches on the North's denuclearization, sanctions enforcement and inter-Korean cooperation.

On the termination of the working group, Price said that “consultation and coordination” with Seoul and allies on the implementation of North Korea policy “is most certainly not ending, far from it.”

He added, “We’ll continue it through a variety of diplomatic mechanisms at all levels of our government,” whatever the “label” may be.

Sung Kim, the U.S. special representative for North Korea, concluded Wednesday a five-day trip to South Korea to meet with Seoul officials, members of academia and civil society. During the trip, he held a trilateral meeting with his South Korean and Japanese counterparts, Noh Kyu-duk and Takehiro Funakoshi, to discuss a coordinated nuclear policy.

Noh asked China play a role in returning North Korea to dialogue, and Liu was said to have “reaffirmed China's commitment to cooperate to play a constructive role.”

As Seoul, Tokyo and Washington are working on closer cooperation on the North Korea issue, Beijing and Pyongyang are also tightening their bonds.

The Chinese Communist Party’s International Liaison Department hosted the symposium Monday to celebrate the third anniversary of Kim's visit to China in 2018 and the second anniversary of Xi's visit to North Korea in 2019. It was attended by Chinese officials including Song Tao, the director of the International Liaison Department, and diplomats from North Korea's embassy in Beijing.

The Chinese Embassy in Pyongyang also held a photo exhibition earlier this week to mark the second anniversary of Xi's visit to North Korea, attended in person by senior North Korean officials.

Chinese Ambassador to North Korea Li Jinjun stressed the importance of cooperation between the two traditional allies for “regional peace, stability, development and prosperity” and the strengthening of "strategic communication" in an op-ed piece to the North’s official Rodong Sinmun Monday.