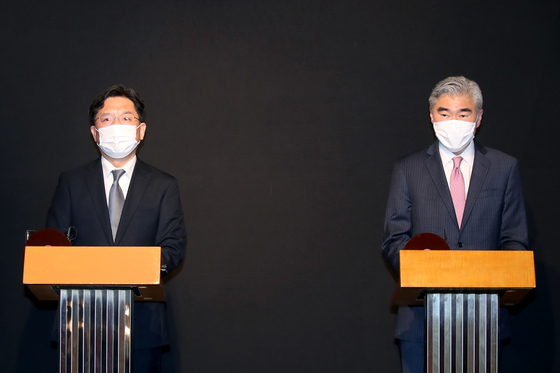 
The chief U.S. nuclear negotiator said Sunday that he looks forward to exploring initiatives including Seoul’s proposal for an end-of-war declaration and humanitarian support for North Korea.

Sung Kim, U.S. special representative for North Korea, told reporters after talks with his South Korean counterpart Noh Kyu-duk, “I look forward to continuing to work with Special Representative Noh to explore different ideas and initiatives, including the ROK's end of war proposal as we continue to pursue our shared objectives on the peninsula.” ROK stands for the South’s official name, Republic of Korea.

Seoul officials have called for efforts to formally declare an end to the 1950-53 Korean War, which ended with an armistice agreement, to encourage Pyongyang to return to the dialogue table.

“We'll also prepare to work cooperatively with the DPRK to address areas of humanitarian concern to help the most vulnerable North Koreans,” said Kim, referring to the acronym for the North's official name, the Democratic People's Republic of Korea.

Kim’s visit to Seoul comes on the heels of a four-day visit by Noh, the South Korean Foreign Ministry's special representative for Korean Peninsula peace and security affairs, to Washington which included trilateral talks with their Japanese counterpart, Takehiro Funakoshi, Tuesday.

This issue was discussed in Noh and Kim’s meeting at the U.S. State Department on Oct. 18 and in further follow-up talks between the top nuclear envoys that took place Sunday in Seoul.

“We remain ready to meet with the DPRK without preconditions, and we have made clear that the United States harbors no hostile intent towards the DPRK,” said Kim in the joint briefing after the talks. “We hope the DPRK will respond positively to our outreach.”

“As an extension of the consultations we had in Washington, I had serious and in-depth discussions today with Representative Kim on the proposal for an end-of-war declaration,” Noh told reporters, speaking alongside Kim. “Based on this, the ROK and the United States decided to continue promoting various measures to engage North Korea, including meaningful confidence-building measures and humanitarian cooperation.”

Noh said the two countries “reaffirmed the shared position that when we resume dialogue with North Korea in the future, we can discuss all matters, including those of concern to the North.”

He added, “As the U.S. government continues to express its willingness for dialogue at all levels, we look forward to the North to respond promptly.”

Pyongyang has been calling on Washington and Seoul to withdraw their “hostile policy,” seen as referring to sanctions and joint South Korea-U.S. military exercises. However, the U.S. President Joe Biden has been adamant on enforcing the strict sanctions regime on the North to curb its nuclear and ballistic missiles programs.

Despite offers for dialogue without conditions, Washington has yet to offer any fundamental changes in its position to help lure Pyongyang back to the negotiation table after denuclearization talks fizzled in 2019.

Seoul and Washington are reportedly discussing the content of a possible end-of-war declaration, and the recent frequent back-and-forth has led analysts to speculate that the United States might be ready to take a more flexible attitude on this matter. Kim’s remarks to the press didn’t further elaborate on the details of the in-depth discussions.

Last Tuesday, North Korea test-fired a “new type” submarine-launched ballistic missile (SLBM) into the East Sea, the first such test in two years, the same day the nuclear envoys of South Korea, the United States and Japan were meeting in Washington and intelligence chiefs of the three countries gathered in Seoul to discuss Pyongyang issues.

Addressing North Korea’s latest SLBM launch, Kim said, “Pyongyang's recent ballistic missile test, one of several in the past six weeks, is concerning and counterproductive to making progress towards a lasting peace on the Korean Peninsula.”

Noting that the launch violates multiple UN Security Council resolutions, Kim called on the North to “cease these provocations and other destabilizing activities, and instead, engage in dialogue.”

The goal of the United States “remains the complete denuclearization of the Korean Peninsula,” said Kim, reiterating its “strong commitment” to the defense of South Korea and to “exploring sustained and substantive diplomacy with the DPRK.”

He said that Washington is “strongest when we work in partnership with our allies and the U.S.-ROK alliance is at the forefront.”

Possibly addressing the Sino-U.S. tensions in the area, Kim added, “There is no challenge too great for our nations to overcome together, and we will work towards an Indo-Pacific region that is open, free and secure.”

Kim, who doubles as U.S. ambassador to Indonesia, wrapped up his two-day visit to Seoul Sunday, and returned later in the day to Jakarta.