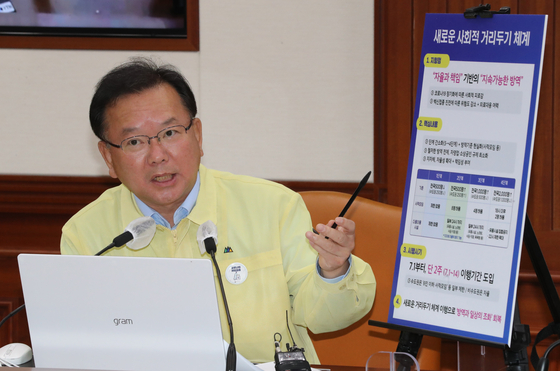 Prime Minister Kim Boo-kyum explains the government's new social distancing scheme during a Covid-19 response meeting at the government complex in Seoul on Sunday. The new rules center on allowing gatherings of more people and lifting regulations for businesses, and will go into effect July 1. [YONHAP]


The government announced new social distancing rules Sunday, expanding the limit on private gatherings up to six people in the greater Seoul area and up to eight in other parts for two weeks from July 1.

In order to prevent a surge of Covid-19 cases, however, the new system will be run as a two-week pilot program from July 1 to 14.

Prime Minister Kim emphasized that masks should still be worn even after the eased distancing rules are applied.

“You have to wear your masks indoors for the time being,” Kim said, adding, “Even after July, you can take off your mask only if a distance of two meters is kept from others outside.”

Level 1 of the new four-tier system requires an average of fewer than 500 Covid-19 cases nationwide and fewer than 250 cases in the greater capital area for a week. Under Level 1, there is no cap on private gatherings, nor any restrictions on business operations such as curfews, but events involving 500 people or more are banned. Religious facilities such as churches will be obligated to limit the number congregants to half their total capacity, while people who have received at least one dose of a Covid vaccine will be exempt from attendance limits.

Level 2 kicks in when average Covid-19 cases in a week are fewer than 1000 nationwide and 500 in the greater capital area. Under that level, up to eight people can attend private gatherings, and events can only be held with under 100 people. Restaurants, cafes, singing rooms, and nightlife venues such as clubs and hostess bars can operate until midnight, while all other businesses will have curfews completely lifted. Religious facilities can have people up to 30 percent of the capacity.

Level 3 is when average Covid-19 cases in a week are fewer than 2,000 nationwide and 1,000 in the greater capital area. Under that level, up to four people can attend private gatherings, and events are allowed up to 49 people. Restaurants, cafes, singing rooms, nightlife venues and saunas must close at 10 p.m. Religious facilities can only fill up 20 percent of their capacity.

In the final Level 4, only up to two people can meet after 6 p.m., and all types of events will be prohibited. All public facilities can receive customers until 10 p.m., while nightclubs and bars that allow dancing will be forced to shut down.

Korea currently runs a five-level national social distancing scale — Levels 1, 1.5, 2, 2.5 and 3 — and the greater Seoul area has been under Level 2, and the rest of the country under Level 1.5, for more than four months since February.

Restaurants, cafes and bars have to close at 10 p.m. in the Seoul metropolitan area, and private gatherings of more than four are banned nationwide except for a few small counties.

As of Saturday midnight, the number of people who have received at least one Covid-19 vaccine dose in Korea surpassed 15 million, or over 29 percent of the population. Around 4.04 million people, or 7.9 percent, had been fully vaccinated. 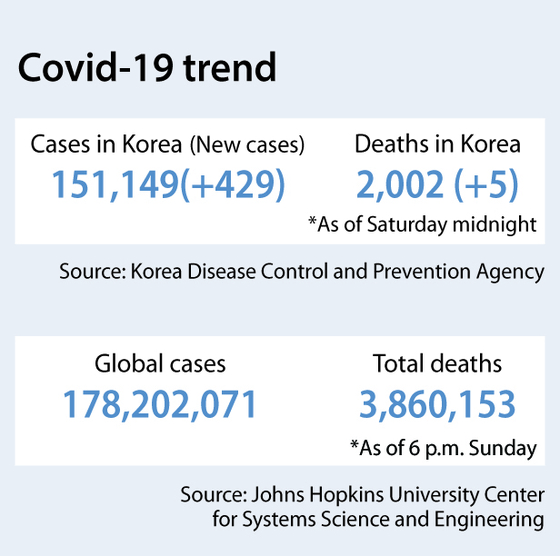