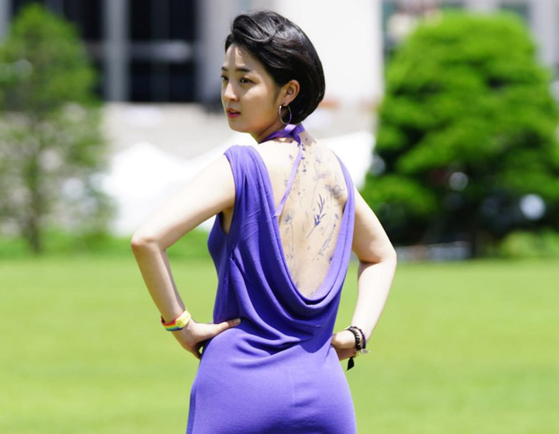 Rep. Ryu Ho-jeong, a lawmaker from the progressive Justice Party, appears wearing fake tattoos at a press conference in the National Assembly on Wednesday. [FACEBOOK]

KIM HYUN-YE
The author is a P Team reporter of the JoongAng Ilbo.


Rep. Hong Joon-pyo, former leader of the conservative opposition, has joined the motion to legalize the tattoo business. Justice Party lawmaker Ryu Ho-jeong, who showed up at the National Assembly with a backless dress and fake tattoos on her back, mentioned Hong, a reminder that he tattooed his eyebrows 10 years ago.

Ryu, a first-term lawmaker of the progressive party, was promoting her bill to legalize the tattoo business, as she argues it should be considered an “art,” not a medical service.

In September 2011, when Hong was chairman of the Grand National Party, he was told he looked ill as his eyebrows had become thin due to stress. His wife encouraged him to get them tattooed.

But his eyebrows ended up obviously too dark, and it was noticeable at meetings. He got the nickname “Angry Bird Hong,” as his eyebrows reminded people of the popular game character at the time.

Tattoos became a part of artistry in Korea in the 1980s. Semi-permanent makeup tattooing the eyebrows was developed in the United States and France. When it was introduced in Korea, tattooists were charged with practicing “illegal medical services.” In 1986, a hair salon owner in Daegu was charged for tattooing the eyebrows of her customers.

In July 1990, the police got a warrant on a tattoo shop owner who made 400 million won ($350,000) from the business. It was so popular that the owner did tattoos on 2,000 clients. The owner was indicted for violation of the special measure on health service crimes. His lawyer said that it was simply a “cosmetic procedure,” not a “medical service.” He was sentenced to one year in prison, parolled for two years, and fined 1 million won. Since then, a constitutional appeal was made to make tattooing legal, but the government policy hasn’t changed yet.

Is tattooing a medical practice or a form of art? I hope Ryu’s performance is not simply remembered for her dress, as she wants to argue that the desire to adorn oneself is not simply dolling up, but a basic human right that should be protected by the constitution as freedom of expression.