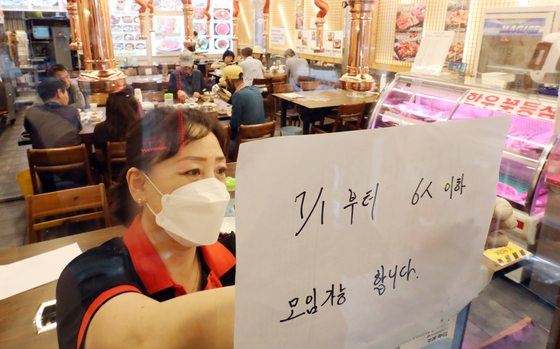 An employee puts up a notice on the wall of a restaurant in Myeong-dong, central Seoul, on Monday, to inform customers of eased social distancing guidelines that will allow private gatherings of up to six people from July in the greater Seoul area. [YONHAP]


Some vaccine incentives, including exemption from mask mandates and participating in larger private gatherings, will begin in July along with the new social distancing guidelines.

These freedoms will apply to people who got at least their first jabs 14 days before.

Starting in July, people who have gotten their first shot will be allowed to not wear a mask when walking outside or exercising at parks.

At mass rallies or events where many people gather, however, wearing masks will still be mandatory, even outdoors.

Another major incentive coming in July for fully-vaccinated people is that they will be waived from the limit on private gatherings.

Revamped four-tier social distancing rules, which will be applied from July 1, will initially allow gatherings of up to six people in the greater Seoul area for two weeks, and then gradually expand to eight.

Under the new Level 1, which is likely to be applied outside of the capital regions, there is no cap on private gatherings. Up to eight people can attend private gatherings in Level 2, which is slashed to four in Level 3 and again in Level 4, where only up to two people can meet after 6 p.m. Gatherings with immediate family members will have no ceilings of attendance in Level 1 and 2.

In addition, fully-vaccinated people will be exempt from attendance limits based on social distancing regulations both indoors and outdoors, as opposed to people who have only received one dose and are exempt from attendance limits only in outdoor places. For example, under the new Level 2, rallies or special events can only hold up to 100 people, and religious facilities can hold up to 30 percent of the capacity.

Religious facilities will be obligated to limit the number congregants at a service to half their total capacity under Level 1, while people who have received at least one dose of a Covid vaccine will be exempt from attendance limits.

Health authorities added that they are considering creating a separate space for fully-vaccinated people in sports stadiums and movie theaters, where food and cheering will be allowed.

People can prove their vaccination status through a digital certificate from the mobile application COOV, or a paper certificate issued after inoculation that can also be printed out from the government’s websites (nip.kdca.go.kr or www.gov.kr).

However, the new changes may lead to confusion as distinguishing between vaccinated and non-vaccinated people outdoors will be difficult. Currently, masks can be taken off if a distance of 2 meters (6.6 feet) is kept from others, but some still get criticized by many who aren’t aware of the exception.

"We will frequently check the vaccination status of people who are mask-less at congested sites, and quickly react if any problems are found,” said Sohn Young-rae, a senior health official of the Central Disaster and Safety Countermeasure Headquarters, during a briefing last month.

Sohn, however, added that the honor system should suffice.

"We believe it is a measure that needs public cooperation based on trust. Thus, we ask for your cooperation in this matter." 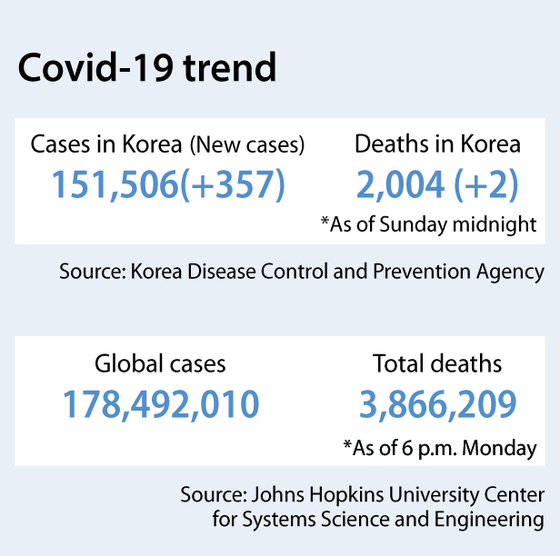