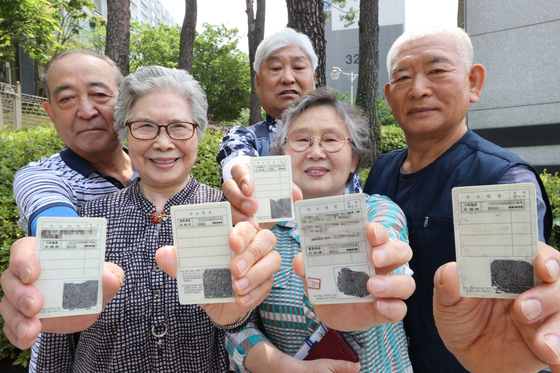 Vaccinated elderly people, sporting maskless faces, show their ID cards with inoculation stickers in Seoul on Monday, as the country began to issue the stickers to vaccinated people for mask-free activities. The vaccination certification is also available in a paper document or digitally on the COOV app. [YONHAP]


Vaccine incentives offered by the government exempting fully-inoculated people from the limit on gatherings are causing confusion among some restaurants and customers in Seoul, where the relaxing of social distancing rules has been postponed to next week.

Seoul, Gyeonggi and Incheon announced Wednesday that they will postpone the easing of social distancing rules to next week as the country risks a possible virus resurgence, but will still keep the vaccine incentives.

The government had earlier stated that from July, fully-vaccinated people, who received their final jabs at least 14 days prior, will be exempt from the current limit of four people on private gatherings. Under the revamped social distancing rules, gatherings of up to six people in the greater Seoul area will be allowed for two weeks, and then gradually expand to eight.

But on the first day of the implementation of vaccine incentives, some customers who visited restaurants with their vaccinated friends and colleagues were turned away, as some restaurants didn’t acknowledge the incentives.

A group of five office workers, including two vaccinated people, were stopped from entering a Japanese restaurant that said it only accepted groups no larger than four people.

"We are not far from a pub in Hongdae where a group of infections recently occurred, so it’s difficult to accept a group of more than five customers even if vaccinated people are included,” said a waiter working at the restaurant in Mapo District, western Seoul.

Another waiter working at an Italian restaurant in Yongsan District, central Seoul, said, “We have been receiving a lot of inquiries since yesterday for reservations of five or more people, that do include vaccinated people, but we are informing them that we’re not accepting groups of more than four.

“Virus cases surged recently, and due to possibilities that people may counterfeit vaccination certificates and since there could be breakthrough infections, we will wait and see for another week,” the waiter added.

On the other hand, some other restaurant owners are looking forward to the vaccine incentives and next week's revamped distancing scheme.

“We are receiving groups of up to six people, including those who are vaccinated,” said the owner of a barbeque place in Yongsan District. “We have some group reservations tonight also. We’ve had difficulties during the Covid-19 pandemic, but we’re hoping to finally be able to breathe again, starting this week.”

Considering the more rapid spread of the virus in recent days, however, voices of concern are rising over the eased distancing system and the incentives for vaccinated people.

Korea’s daily new virus cases stayed in the 700s for the second consecutive day on Thursday, with more than 80 percent of the total cases coming from the greater Seoul area.

"It is difficult to ease the distancing rules in Korea as the vaccination rate isn’t high enough,” said Eom Joong-sik, an infectious diseases professor at Gachon University College of Medicine.

“Revamping the quarantine system in a situation where the risk assessment of virus variants such as the Delta variant hasn’t been properly done is too optimistic,” he continued. “Postponing it for one week has bought us a little time, but it is not a fundamental solution to solve the pandemic.”

He added, “The timing of relaxing the distancing scheme should be considered around the Chuseok harvest holidays in September, or when the vaccination rate exceeds 50 percent, but I believe it is premature to do it in July, ahead of the holiday season.”