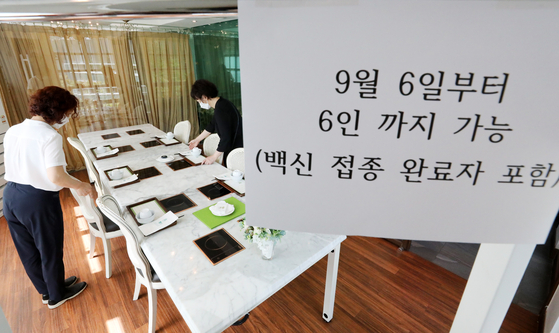 A sign describing the soon-to-be-eased social distancing rules is put up in a restaurant in Seoul on Sunday. Closing hours of restaurants and cafes will be extended by one hour to 10:00 p.m. starting Sept. 6, with gatherings of up to six people including fully vaccinated people to be allowed. [NEWS1]


The Korea Disease Control and Prevention Agency (KDCA) is considering whether to vaccinate the recipients again, as the vaccines in question may not effectively protect against the virus.

According to the health authorities, Korea University Guro Hospital in western Seoul administered some 140 people with Pfizer doses that came close to or exceeded their expiration dates after having being thawed for use on Aug. 26 to 27.

Once thawed, unopened vials of the Pfizer vaccine can be stored at 2 to 8 degrees Celsius (35 to 46 degrees Fahrenheit) for up to 31 days.

Many were receiving their first shot.

The hospital discovered the mistake last Friday and reported it to the district health center at 5 p.m. on the same day, the health center said.

"We discovered that you have been inoculated with a vaccine that was close to or had slightly passed its expiration date after thawing,” Korea University Guro Hospital said in a text they sent out to the vaccine recipients in the afternoon on Aug. 3.

“Although there are no safety concerns, there are concerns that they may not provide sufficient immunity, and the KDCA will decide whether to revaccinate or not,” the hospital said.

Despite the assurance there would be no safety concerns, Yonhap News reported that some individuals who had received these shots visited the emergency room later with complaints of abnormal reactions.

“We will conduct thorough internal inspections, supervision and instruction to prevent a recurrence," an official from Korea University Guro Hospital said.

Meanwhile, another batch of 1.263 million Moderna doses arrived at Incheon International Airport at 4:25 p.m. Sunday, which is part of 7 million doses scheduled to land by Sunday.

The U.S. pharmaceutical company announced last month that it will send 7.01 million doses of its vaccine by Sept. 5, after a Korean government delegation flew to the company's headquarters in Massachusetts on Aug. 13 to complain about the supply disruption.

A total of 4.206 million Moderna doses have been shipped thus far, including Sunday’s arrival, and the country is still waiting to receive 2.804 million more doses.

Health authorities earlier mentioned there is a possibility that some may arrive after the weekend, while hinting that Moderna's deliveries could be more than the announced amount.

From Monday, the country will again extend its social distancing restrictions, but with a few modifications.

According to the government, Level 4 social distancing measures in the greater Seoul area and Level 3 in other parts will remain in force through Oct. 3. All restaurants, cafes, noraebang (singing rooms), theaters, gyms, PC bang (PC rooms) and hagwon (cram schools) in the Level 4 areas will again be allowed to operate until 10 p.m. from the previous 9 p.m., the same as in areas under Level 3.

Gathering limits for wedding venues, which have been a target of criticism as many couples have had to hold their ceremonies as scheduled with empty seats, have been slightly eased to allow up to 99 people from 49 people, if no meals are provided.

In addition, the country added new vaccine incentives for people who have been fully vaccinated for at least two weeks.

In Level 3 areas, private gatherings of up to eight people will be allowed throughout the day, if the groups include at least four fully vaccinated people.

During the week of the Chuseok harvest holidays, from Sept. 17 to 23, families throughout the country will be allowed to gather in groups of up to eight people, if the groups include at least four fully vaccinated members. Families meeting in the greater Seoul area are allowed to gather in these larger groups only in homes, while there are no similar restrictions for non-capital regions.

Another change applies to nursing homes, which were not allowing in-person visits by relatives under Level 4.

From Sept. 13 to 26, patients and visitors will be allowed to meet face-to-face if both are fully vaccinated. If either is not fully vaccinated, they will have to communicate through windows or a device to keep them socially distant. 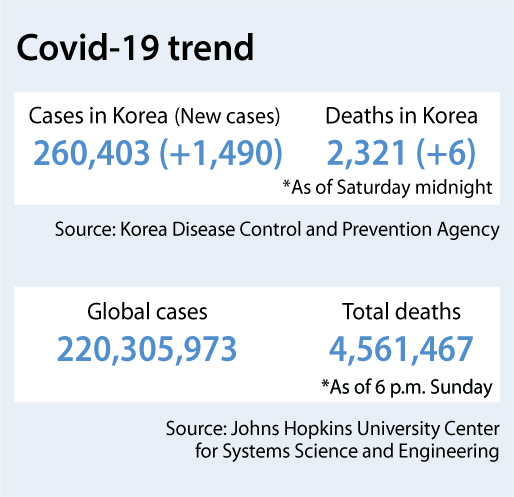 Struggling to curb virus infections ahead of the major national holiday, the country saw an additional 1,490 new Covid-19 cases on Sunday, including 1,461 local infections, raising the total caseload to 260,403, according to the KDCA.