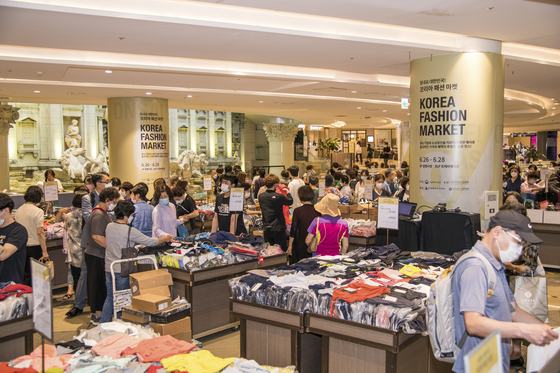 
Summer is here, and so are the sales, as the government continues to promote events in an effort to pump up the economy and drive demand.

Inoculations may help, as more people are more confident about stepping outside.

First to begin is the Korea Companion Sale, a government-led event that runs from Thursday through July 11. It will be followed by Korea Fashion Market Season 3, a sales event running from Friday through July 1.

Korea Fashion Market Season 3, organized by the Ministry of Trade, Industry and Energy and Korea Fashion Industry Association, is being supported by department stores and online fashion malls, including Musinsa and W Concept.

Around 240 brands will be joining in the most recent iteration, with up to 90 percent discount offered.

During the Korea Companion Sale, promoted by the Ministry of SMEs and Startups, products will be promoted via numerous channels, including live commerce and home shopping.

Delivery apps will offer customers up to 30 percent discounts on regional specialties and hold live-commerce shows.

Hyundai Department Store said it plans to give out around 3 billion won in points to customers that can be used at the department store.