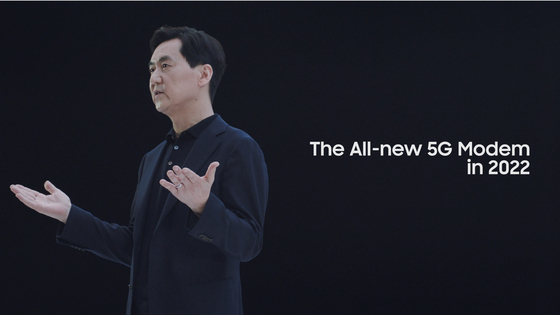 Cheun Kyung-whoon, president and head of networks business at Samsung Electronics, delivers a speech at a virtual event on Tuesday. [SAMSUNG ELECTRONICS]


Samsung Electronics unveiled a new set of 5G network modem chips at a virtual event on Tuesday, where executives also discussed its strategy to achieve a higher market share in the network equipment business largely dominated by Chinese vendor Huawei.

The event marks the company’s first public presentation solely dedicated to network equipment after Samsung Electronics landed a series of 5G contracts with top telecommunication providers including Verizon and Vodafone.

Cheun Kyung-whoon, president and head of networks business at Samsung Electronics, said that the company provided over 4 million 5G receivers across the world.

The latest 5G modem chipset is capable of transmitting twice the amount of data compared to its predecessor, with half of the energy consumed.

The electronics company also introduced a new chipset lineup that runs in the higher frequency 28 and 39 gigahertz range.

Another area of focus was a virtualized radio access (vRAN) system, a product segment that was supplied to Verizon and Vodafone through the latest deals.

The technology is important in realizing open interfaces in radio access networks, or Open RAN systems, because some countries — most notably the United States — are pushing the new technology to curb telecom operators’ reliance on Huawei.

In theory, the Open RAN approach would allow telecom operators to mix and match components of a network system from multiple vendors by using open and interoperable interfaces rather than relying on a single vendor.

It also highlighted the increased adoption of private 5G networks, wireless network connections dedicated to a certain organizations, in the pandemic era.

Examples included its smart factory in Suwon, Gyeonggi and a number of government agencies running a joint network to combat natural disasters.

The company also shared its latest development for the sixth generation network, saying that it successfully conducted a 6G test with the University of California, Santa Barbara.

In the meantime, the tech company is scheduled to showcase new smartwatch models and upgraded security systems at the upcoming Mobile World Congress (MWC), which will be held virtually on June 28.

It will demonstrate “its vision for the future of smartwatches at the event, with new opportunities for both developers and users,” the company said in a statement on Tuesday, adding that it will also announce its latest security enhancements.