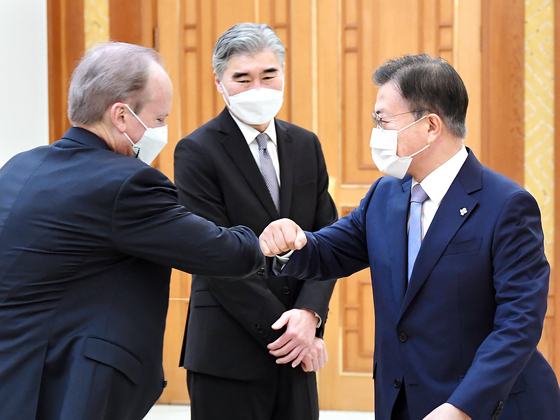 
Sung Kim, the U.S. nuclear envoy, told President Moon Jae-in that he will do his “utmost to resume dialogue between North Korea and the United States” in a visit to the Blue House Tuesday.

Moon told Kim, the U.S. special representative for North Korea, “I will do everything possible to put inter-Korean and U.S.-North Korean relations on a regular trajectory during the remainder of my term,” Blue House spokesperson Park Kyung-mee said in a statement.

He also expressed hope that “North Korea-U.S. relations will succeed in improving relations to achieve denuclearization and the establishment of peace on the Korean Peninsula.”

Kim made a courtesy call to Moon Thursday afternoon during his five-day visit to Seoul, his first since he assumed the post as U.S. nuclear envoy last month.

The Blue House said that Kim reaffirmed U.S. President Joe Biden's support for meaningful dialogue, engagement and cooperation between the two Koreas, said the Blue House, pledging he will do his “utmost to resume North-U.S. dialogue."

Moon called the Biden administration's approach of gradually working toward the complete denuclearization of the Korean Peninsula through dialogue and diplomacy “appropriate” and emphasized the need to work together to “develop a virtuous cycle” to improve inter-Korean relations in tandem with the resumption of dialogue between the United States and North Korea.

Earlier in the day, Unification Minister Lee In-young proposed that Seoul and Washington work together to arrange a reunion of family members separated in the 1950-53 Korean War in talks with the U.S. nuclear envoy as a part of efforts to lure Pyongyang back to the dialogue table.

Lee told Kim that Seoul and Washington can cooperate in humanitarian areas such as of Covid-19 prevention, food aid and the livelihood of the people, as well as war-torn family reunions on North Korea’s Mount Kumgang.

“I think that such cooperative processes may be a practical approach to bring North Korea back to the dialogue table and to create a good environment for denuclearization negotiations,” Lee commented, saying this was a “watershed moment.”

He proposed that Washington reviews such ideas taking an “active and creative approach between South Korea and the United States.”

“I believe our two governments are very closely aligned in all important aspects of our North Korea policy,” said Kim. “Most importantly, I think our two countries agreed on the shared commitment to pursue complete denuclearization of the Korean Peninsula through diplomacy and dialogue.”

Kim added, “I agree that this is an important moment for both the Republic of Korea and the United States, and I hope that the DPRK will respond positively to our proposal for a dialogue.”

DPRK is the acronym for the North's official name, the Democratic People's Republic of Korea.

U.S. Secretary of State Antony Blinken pledged earlier this month to work with both Seoul and Pyongyang to help arrange reunions of Korean-Americans who were separated from family members during the Korean War, describing their plight as “heart-wrenching.”

Several bills calling for reunions of Korean-Americans and family members in the North have been proposed in the U.S. Congress.

However, Pyongyang has been unresponsive to Washington’s offer of unconditional dialogue.

Noh Kyu-duk, Seoul’s special representative for Korean Peninsula peace and security affairs, and Sung Kim reached the agreement during their bilateral talks the previous day, according to the ministry, who said in a statement that the nuclear envoys “agreed to consider terminating” this consultative body after checking its operations.

This could be considered a conciliatory gesture toward North Korea, who has often accused the Seoul-Washington working group as being a hindrance to inter-Korean ties. Some South Korean civic groups have also seen the working group as an impediment to their inter-Korean cooperation initiatives.

Seoul and Washington set up the consultative body in November 2018 to coordinate their approaches on the North's denuclearization, sanctions enforcement and inter-Korean cooperation.

The Foreign Ministry said the two sides agreed to strengthen their director-general level consultations and their talks between the top nuclear envoys instead.