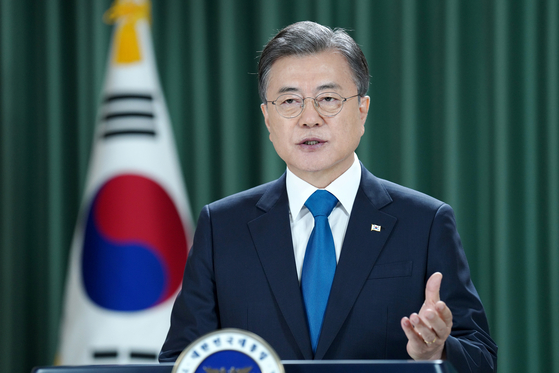 
President Moon Jae-in’s speech calling for the international community to support a formal end to the Korean War is getting poor reviews and being ignored by the countries most involved: the United States, China and North Korea.

“In his keynote speech for the United Nations General Assembly, Moon said an end-of-war declaration will open the door to complete denuclearization and permanent peace on the Korean Peninsula,” said Rep. Yun Hee-suk, spokesman for the People Power Party (PPP), on Wednesday. “One year and two months ago, the president made a similar remark. We wonder how useful this proposal is in our current situation.”

Moon delivered a speech by video to the 75th UN General Assembly in New York on Tuesday. The UN held the event via video link due to the coronavirus pandemic, and Moon's speech was aired early Wednesday morning in Seoul. Among more than 170 leaders who participated in the meeting, Moon was the 10th to speak.

The two Koreas remain in a technical state of war. In 1953, an armistice agreement was signed by the UN Command, North Korea and China.

"Peace on the Korean Peninsula will guarantee peace in Northeast Asia as a whole and, going one step further, bring positive changes to the world order as well," Moon said in his speech. "I believe it begins with declaring an end to the war, an act that can affirm mutual commitments to peace."

Moon’s claim that an end to the conflict would "open the door to complete denuclearization” is a change from his previous position that progress needed to be made toward denuclearization of North Korea as a precondition for an end-of-war declaration.

In a 2018 UN General Assembly speech, Moon said, "I look forward to seeing bold measures for denuclearization implemented among the related countries, leading to the declaration to end the war."

During the first years of Moon's presidency, expectations were high that inter-Korean relations and North-U.S. relations would see real progress toward denuclearization. In 2018, inter-Korean relations progressed rapidly, and Moon held three summits with North Korean leader Kim Jong-un in that year. Negotiations between Pyongyang and Washington were also active.

Moon’s latest proposal gained no immediate response from the countries that would be involved in replacing the Korean War armistice with a declaration of a formal ending of the war.

North Korea made no response to Moon’s speech as of Wednesday afternoon.

The Blue House defended Moon’s speech Wednesday, although it admitted that a formal ending of the Korean War won’t be realized quickly.

“A speech of a political leader is an expression of his will and commitment,” a senior presidential aide said.

“In order to create a breakthrough, the president did what he can do to restart the stalled clock of denuclearization and peace regime,” the aide said.

According to Blue House sources, Moon and his security aides spent weeks debating whether the proposal should be part of the UN speech or not. While some protested, citing North Korea’s recent snubs, Moon decided to include it, they said.

In his speech, Moon also proposed establishing a regional public health organization and using it as a means to guarantee security to the North.

"Hoping that the international community views the issues surrounding the Korean Peninsula through the lens of more inclusive international cooperation, I propose today launching a Northeast Asia Cooperation Initiative for Infectious Disease Control and Public Health, whereby North Korea participates as a member along with China, Japan, Mongolia and the Republic of Korea," he said, using South Korea's formal name.

"A cooperative architecture that guarantees collective protection of life and safety will lay the groundwork for North Korea to have its security guaranteed by engaging with the international community."