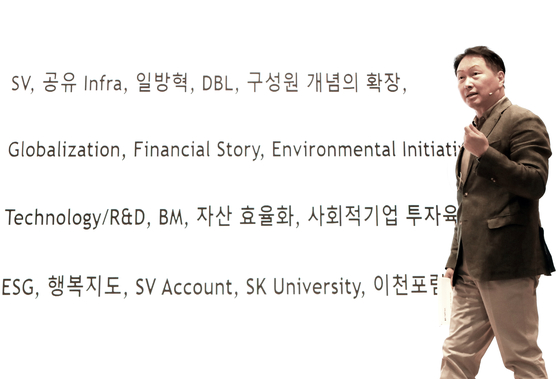 SK Inc. Chairman Chey Tae-won speaks at a meeting with the CEOs of SK affiliates on Tuesday in Icheon, Gyeonggi. [SK INC.]


All SK Group affiliates will achieve net zero carbon emissions ahead of its 2050 goal, SK inc. Chairman Chey Tae-won said at an executive-level meeting on Tuesday.

“Considering the costs related to carbon emissions will constantly go up, carbon neutrality is not a matter of whether we will do it or not, but is an issue of out competitiveness,” Chey said. “If we move swiftly, we could get access to a wider array of strategies and win the competition."

The CEOs of the affiliates including SK Telecom and SK hynix agreed to follow through with the new objective by increasing the use of
renewable energy.

SK Materials, a gas affiliate, will lead the shift, aiming for net zero carbon emissions by 2030.

Launched by the British non-profit organization The Climate Group in 2014, the signatories aim to realize a 100 percent renewable energy goal by 2050.

Chey also noted that the group will continue to be on the lookout for investments in the battery, hydrogen and semiconductor sectors.

“When we made a financial story based on investments into chips and hydrogen, the markets responded positively,” he said.