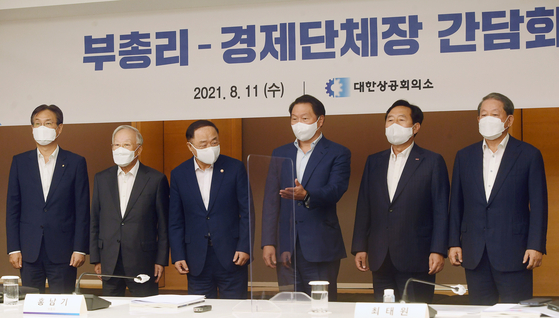 Korea Chamber of Commerce and Industry (KCCI) Chairman Chey Tae-won, fourth from left, poses with Finance Minister Hong Nam-ki, third from left, and other heads of business lobbying groups on Wednesday at the office of the KCCI. [YONHAP]


The chiefs of Korea’s biggest business lobbying groups asked for more aggressive government support for companies trying to cut their carbon emissions during a meeting with Finance Minister Hong Nam-ki.

Korea Chamber of Commerce and Industry Chairman Chey Tae-won requested compensation for the costs required to research and develop carbon reducing technologies, citing examples in the United States and Europe.

“Carbon neutrality is an irreversible trend that defines the fate of industry, and comes with opportunities for new businesses,” Chey said during the meeting.

“An astronomical amount of investment is being made in the U.S. and EU and we hope that [the Korean government] will be well-positioned in the race by providing aggressive investment and full support,” he said.

“Such techniques can’t be developed by a single company and cooperation between public institutions and private companies is essential,” Chey said.

Chey also raised the need to increase subsidies to boost sales of electric vehicles (EVs) and build infrastructure for them.

“Germany keeps on expanding subsidies for electric vehicles whereas Korea often see the subsidies running out faster than expected or being delayed,” he noted.

Chey said a dearth of charging stations makes EVs less attractive, suggesting that the government shell out more to build the infrastructure.

Local media outlets speculated that Chey would bring up the subject of a pardon for Samsung Electronics Chairman Lee Jae-yong, who will be released on parole on Friday, but the issue was not covered in his speech.