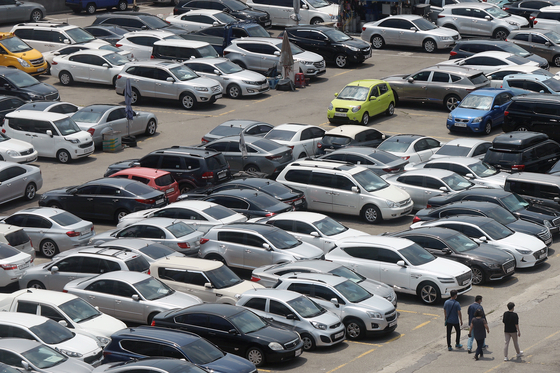 A lot is packed with secondhand cars located in Seongdong District in eastern Seoul on June 13. [NEWS1]

The first rule of the auto market is that a car depreciates instantly when you drive it off the lot.

In Korea, the rule no longer applies. Cars are appreciating after being purchased, and their value is holding.

Kia's K8 is just one of many models in which delivery has been delayed due a shortage of auto semiconductors. Kia’s Hwaseong plant, which produces the K8, slashed production in March by suspending weekend shifts. Hyundai Motor's Ulsan and Asan plants also partially shut in May and June in order to cope with chip shortages.

Those who place orders for the new K8 have to wait at least four months, according to Kia.

Delays in car production and longer delivery times are leading customers to look at the used car market, long shunned in Korea due to the impression that dealers rip off customers by selling damaged cars at high prices. 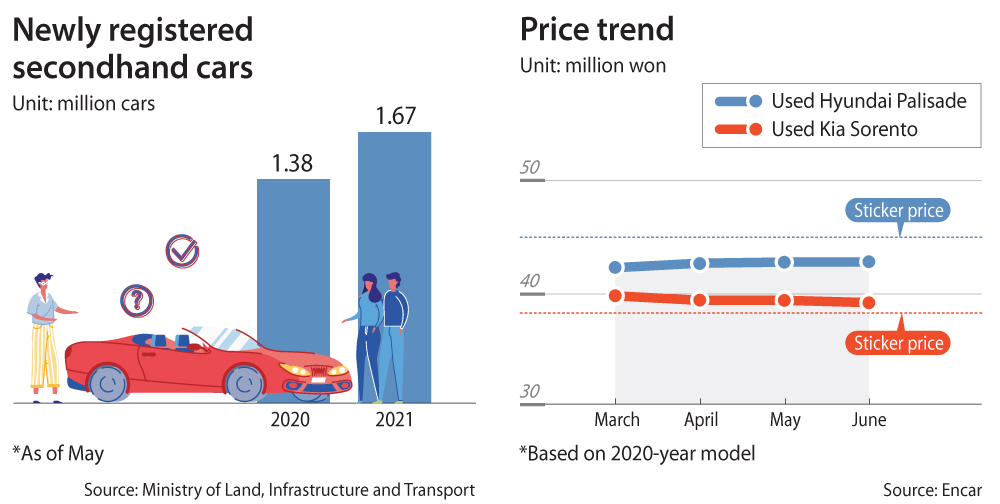 The number of newly registered secondhand cars was up 20.1 percent this year through May on year to 1.6 million units, according to the Ministry of Land, Infrastructure and Transport.

The surge in demand and the lack of supply are pushing up the prices of popular secondhand cars.

The average market price of used 2020 Kia Sorento SUVs is 39.2 million won as of June 23, according to Encar. The sticker price of the same model is 38.2 million won.

Secondhand Kia 2020 Carnival minivans are being traded at 41.6 million won on Encar, higher than the model’s sticker price of 39.9 million won.

“Prices of secondhand cars in April and May have inched up or maintained their levels despite the fact that those months are slow seasons for used car trades,” said a spokesperson from Encar.

“The peak season starts from June, and when the new car delays are added, the rising trend in secondhand car prices is likely to continue for a while longer.”

AJ Sellcar said the average market price of the site’s top 10 models rose by 6.1 percent in May compared to the previous month.

The turnover rate of used cars is also picking up pace, according to Encar.

The company said that 2020 and 2021 Hyundai Motor Palisade SUVs, the brand's most popular SUV model, moved on average in 18.6 days in May compared to 24.9 days the previous month.

Want to buy a new car? Get ready for a wait.