Kim Seo-hyung stretches her range in 'The Humming'

Kim Seo-hyung stretches her range in 'The Humming' 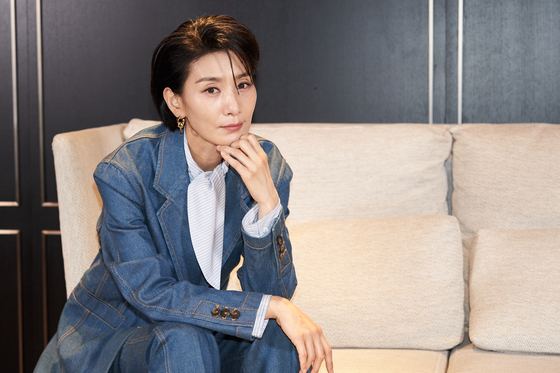 
Actor Kim Seo-hyung has played indelible roles, including the evil mistress of her best friend’s husband in SBS's “Temptation of a Wife” (2008-2009) and a spiteful university admissions consultant in the JTBC drama series “SKY Castle” (2018-2019).

After successfully wrapping up her first lead role in a television series — a police detective in SBS's “Nobody Knows” (2020) the actor is back on the silver screen in the horror film “Whispering Corridors 6: The Humming.”

She portrays Eun-hee, who returns to her high school in Gwangju to work as vice-principal. Soon she is haunted by the ghost of her best friend, who committed suicide in the school bathroom. While grappling with her own past, Eun-hee stumbles onto another secret on the school grounds when one of the students, Ha-young, tells her that her best friend committed suicide in the same bathroom. 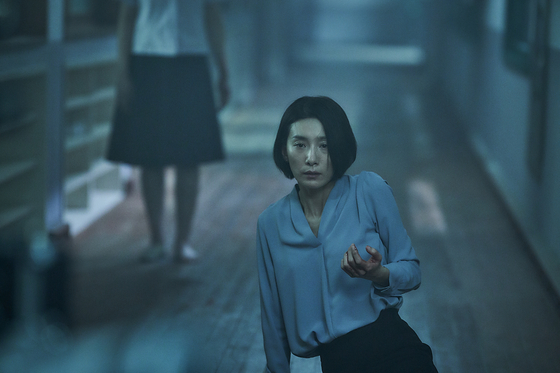 Kim Seo-hyung portrays Eun-hee, the vice principal of a school in her hometown in Gwangju, still haunted by her memories with her best friend in “Whispering Corridors 6: The Humming.” [KTH]


Although the film’s main concern is horror, the story also deals with the tragedy of the May 18 Gwangju Democratization Movement, which is part of Eun-hee’s past. Despite the heaviness of that them, the actor believes the film’s message is simple.

“I portray a girl who was once a victim. She grows up to be an adult who does not look away from the same kind of atrocity happening on the school grounds right now,” Kim said in an online interview with the Korea JoongAng Daily on Monday.

“I believe that’s the core message of the film: Be an adult who’s not evasive, or who turns away from injustice. I think Eun-hee has the courage to stand with the students and fight for them because adults did not do that for her in the past. If that’s what the film is about, then I don’t necessarily think that it’s a heavy topic.” 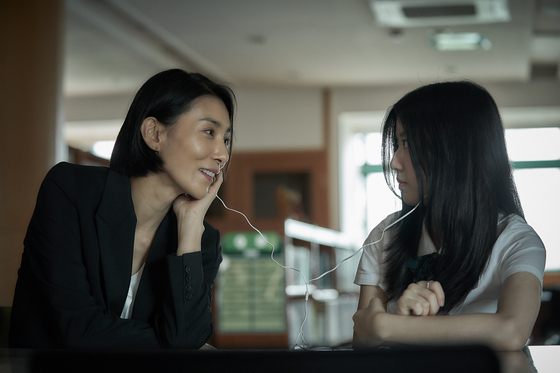 Eun-hee tries to approach a student named Ha-young who seems to want to tell Eun-hee something. [KTH]


Ironically, Kim says she can barely watch horror films, and acting in them was difficult.

“In ‘Voice,’ I am hung by a cello string,” Kim said. “I was horrified and absolutely scared to enact that scene. it was really hard for me. It's moments like these that make it difficult for me to act in the horror genre. In ‘The Humming,’ although everything was artificial on the sets, the scary scenes were still really scary. I cried a lot after filming. I had to spend a lot of time mentally preparing myself when I went onto that set.”

In her 26-year career Kim has mostly portrayed powerful and forbidding roles, like a lawyer, prosecutor, or a police detective. She's tall and lean, with a low voice, and casting directors pigeon-holed her.

In recent years, however, the actor has stretched her range and her strong, poised, successful characters show more compassion and carry a hint of warmth. In the tvN drama series “Mine.” Kim portrays a daughter-in-law of family running a business group, who tries to help her sister-in-law find freedom. 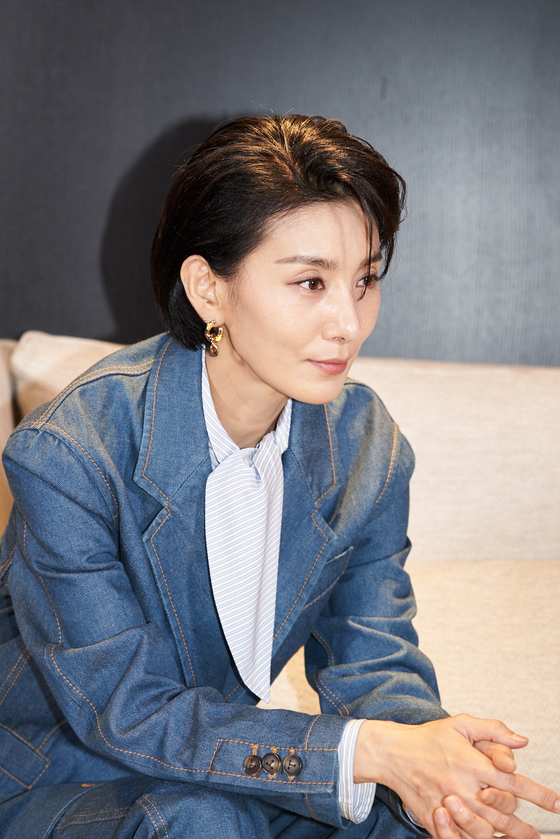 
“The range of roles offered to me still includes those strong characters,” Kim said. “I don’t know what roles I will undertake next, but if I’m given another strong character, then for the sake of the project I try to empty myself. What I mean is that I try to go blank, to be normal as I can be in my daily life so that when I take on another similar role, it doesn’t repeat what I already did.

“But as I take on such roles, I think I know now, at least a little, the skills of how I can emit an aura and how I can look cool and chic,” she added.

The actor is aware that it is difficult to break a mold that’s so recognized by the public.

“I can’t wait around forever for a different kind of role, so I had to find my own breakthroughs,” Kim explained. “Even though they [the roles] may be similar, I carry the responsibility of twisting them to show a different kind of coolness, a different kind of strength from my prior roles. Especially in ‘Mine,’ I had a romance in my character’s narrative. And when such opportunities build up, maybe one day, people might give me a romantic character to do. I know that leap won’t be easy. That’s why the romance in ‘Mine,’ and Eun-hee was so significant for me.” 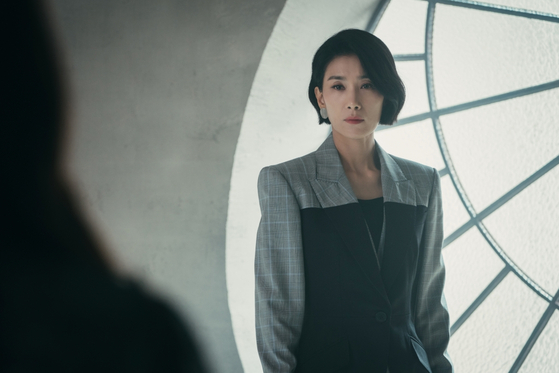 Kim portrays the aristocratic daughter-in-law of a chaebol family in tvN drama series "Mine." [TVN]


Her roles have brought the actor many female fans over the years, which she says she’s grateful for.

“My roles have also allowed me to be this successful, career-driven women in a society,” she said. “Come to think of it, even in this age, I didn’t really have a lot of role models, adults to look up to, and when I was portraying such characters, I was acting out those adults I wanted to meet, those friends, seniors who can take hold of my hand and lead me. I think that desperation was brought out well when I acted. And I think that the preferences of my female fans may be not all that different from mine. We’re all thinking along similar lines.” 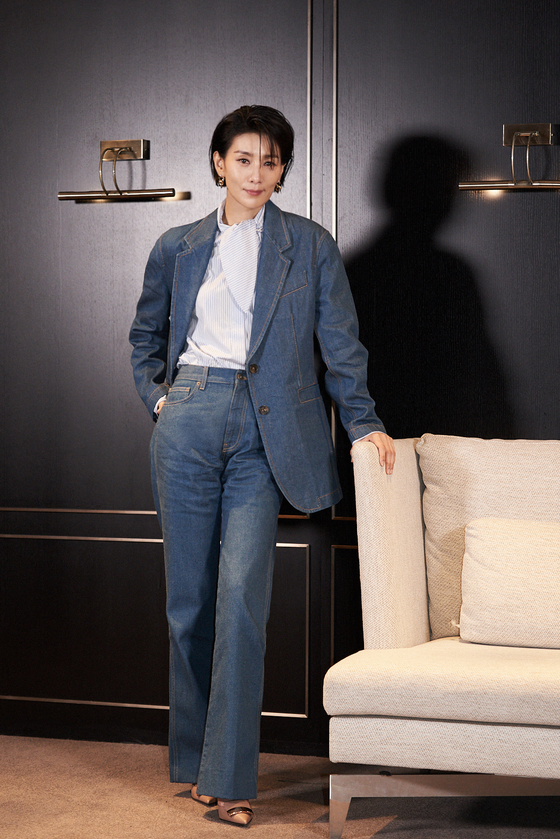 
Eun-hee in "The Humming" was the kind of adult the world could use more of, Kim said, capable of extending a helping hand to people in need.

"I know that the film was released under the genre of horror, and the story offers an audience the satisfactory kind of horror they expect in such film," Kim said.

"What I wanted to say through my portrayal of Eun-hee isn't all that groundbreaking or serious. We need more adults who can protect children. [...] I learned through Eun-hee that being a good adult doesn't take all that much. Just being there and listening to people can bring a huge comfort to them."