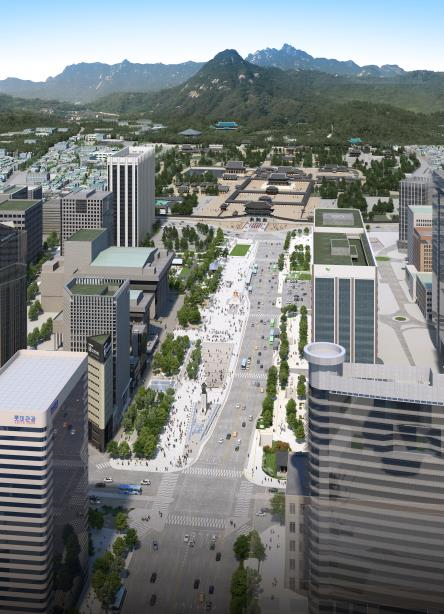 A rendering of how Gwanghwamun Square will look like following the completion of its renovation. [SEOUL METROPOLITAN GOVERNMENT]

Most of the big changes to Gwanghwamun Square will be completed by next April, the Seoul city government said Wednesday.

“Apart from the restoration work on woldae [terrace] and the Haechi statues, all current construction on the square will be completed by April,” said the Seoul Metropolitan Government in a statement.

The square is being expanded westward, eliminating southbound traffic lanes between the square and the Sejong Center for the Performing Arts.

The statues of King Sejong and Admiral Yi Sun-shin will stay put but will be augmented with features to tell their stories, according to the city government. They include Hangul letters designed in a way that they look metallic during the day but are lit at night. Sejong is the king of Korea who invented hangul, or the writing system of the Korean language.


The first floor of the KT headquarters in Gwanghwamun will also be turned into a public lounge, and the basement floor will have new restaurants and cafes.

Some historical features of the square will be restored by 2023, according to the city government.

This includes the statue of haetae (a mythical unicorn lion, which is a legendary creature in Korea) that used to stand on south side of the Gwanghwamun Gate in the Joseon Dynasty (1392-1910), and the woldae, or terrace, that used to stand in front of the gate. The woldae was where the king held public rituals, and where ordinary citizens could get a glimpse of the king. 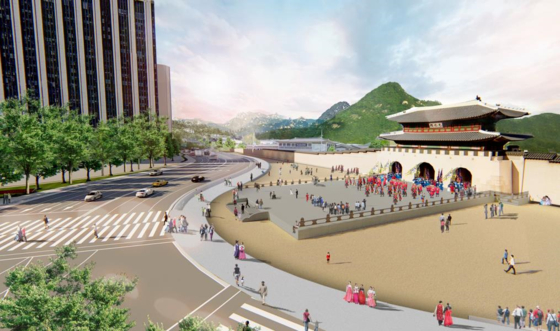 An image of the Gwanghwamun Gate where the woldae (terrace) is restored. [SEOUL METROPOLITAN GOVERNMENT]

Since the reconstruction began last October, the city government has discovered additional historical features of the area. They include stereobates from different Joseon periods, as well as waterways, a well, stone foundations for fences, not to mention pieces of ceramic, which were discovered underground, particularly under the road in front of the Seoul Government Complex.


These finds point to the existence of a road called Yukjogeori from the Joseon Dynasty, which used to stretch north-south from the Gyeongbok Palace and used to hold important government offices.

These finds will be preserved and exhibited at the square by 2023, the city government said. 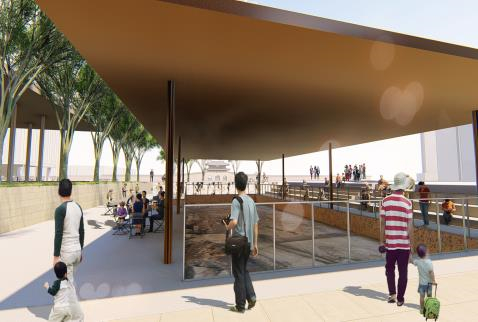 An image of how some of the cultural artifacts found would be displayed in the Gwanghwamun Square by 2023. [SEOUL METROPOLITAN GOVERNMENT]

“We will connect the square to its surrounding features so that visitors can enjoy the square in diverse ways,” said Ryu Hoon, vice mayor of administration in Seoul. “This way, by April next year, we hope to create a representative space in Korea that citizens love and take pride in.”

gwanghwamun restoration to be completed april 2022