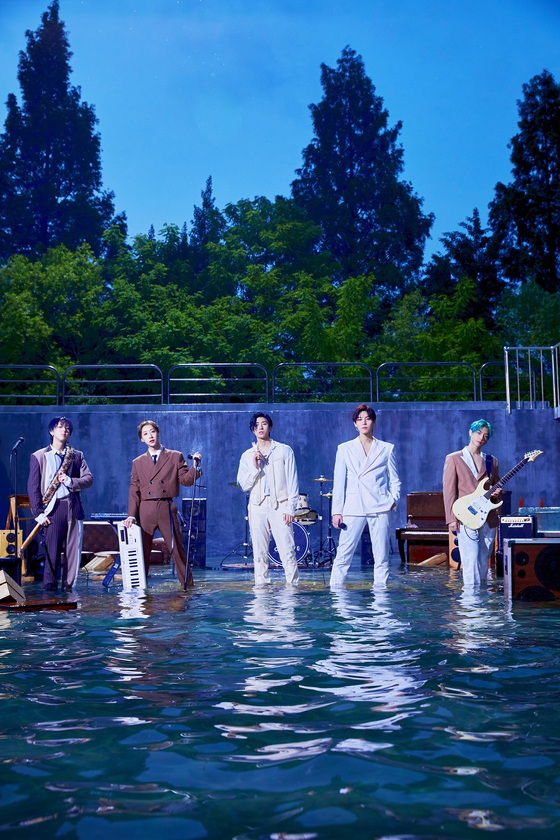 
Summer is coming and so is the rainy season. Some people might get a bit down in the wet weather, but boy band Onewe has something for them.

The five-member rock band will release “Planet Nine: Alter Ego,” its first EP, on Wednesday evening. It’s the first new music from Onewe in six months. “Memory: Illusion,” a single, came out in December. The band described the album as more “experimental” than ever, still powerful but this time bolder with “Rain To BE,” the lead track. The band went for a rougher and tougher performance, but added a more delicate touch to their music.

“The lead track ‘Rain To Be’ is the story of Onewe in a way,” said member Kanghyun to the Korea JoongAng Daily in an email interview held prior to the release of the EP. “We’ve strangely see a lot of rain when we release new music, and we’ve been nicknamed the ‘rain men’ because of that. We were inspired by that and we came up with a story of a boy who wishes for rain because that’s when the person that he waits for comes to him. You should listen to the song imagining yourself as the character in the song’s story.”

Harin added, “Summer is not summer without rain. I think the song will be even better if you listen to it on a rainy day, and I hope it’s listened to a lot on those days.” 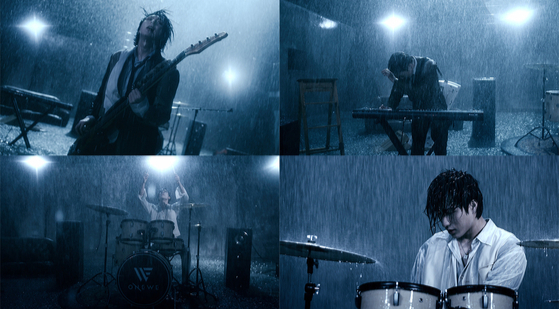 Captured images from boy band Onewe's new track ″Rain To Be″ featuring members of the band singing in the pouring rain. [RBW]


Truth be told, no member other than Kanghyun said that they actually like the rain. Kanghyun said he always remembered his younger days while listening to his favorites from the past, but for the rest of the band, rainy days meant dreary days. Harin said the rain made him feel like he “left something undone,” and Yonghoon said he felt “down” on rainy days — perhaps all the more reason to compose a song powerful enough to overcome the gloom.

“I really don’t like rainy days,” said CyA. “I hate the screeching sound that your shoes make when it’s wet. It sounds like chalk on board. I like to listen to songs with a lot of echo when I feel like that. You can hear a lot of that on Soundcloud” account.

Kanghyun wrote and composed the song “Rain To Be,” and also participated in writing other songs on the EP. All five members took part in either writing the lyrics or the music of the seven tracks. “Planet Nine: Alter Ego” adopts a sci-fi fantasy theme, revolving around the story of members of Onewe who find their alter egos on the ninth planet of the solar system that had not been discovered yet. The title of the songs follows through with this storyline, starting with “Intro: Spaceship” and finishing with “Cosmos.”


“I actually remember that we commented on ourselves after each recording session and correcting ourselves,” said Yonghoon. “It was quite a memorable experience to criticize myself.” 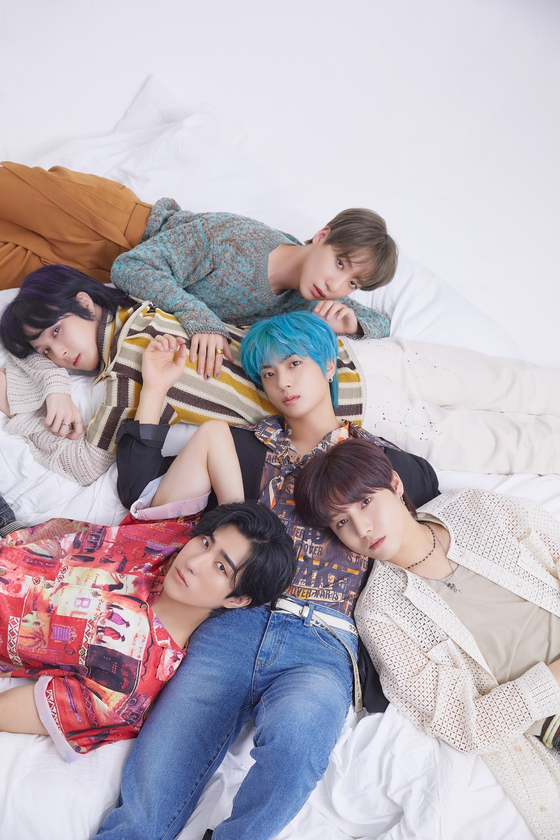 
“The album shows a new Onewe that Onewe finds in undiscovered territory,” said Kanghyun. “We’ve tried to take more risks than ever both with our music and our performance.”

“Different themes and stories come together to make one album and show our identity as Onewe,” added Harin.

The members have been known to take part in all the songwriting since their debut. They always comment on each other’s works to bring out the best results. The songs on this album were all so good that they were “busy complimenting each other” according to Kanghyun.

“I actually remember that we commented on ourselves after each recording session and corrected ourselves,” said Yonghoon. “It was quite a memorable experience to criticize myself.”

Onewe debuted in May 2019 as the “brother band” of Oneus, which in January 2019 was the first boy band to come from RBW, the agency of girl group Mamamoo. While Oneus went with an energetic dance pop groove, Onewe walked the path of a rock band, a lesser explored realm in the K-pop scene. But before that, the members actually had their first debut in 2016 as a band named mas0094 with “Feeling Good.” Unsuccessful in that incarnation, the members took part in RBW’s audition program in 2017 and came back as Onewe “1/4,” a single.

“The members didn’t change, neither did our musical style, so we didn’t really feel much difference when we worked together,” said Harin. “But it did give us a sense of starting over because we could begin again under our new name.”

Since then, the band has been demonstrating a unique style with their rock sound, such as with “End of Spring” (2020), an upbeat country-style pop track, and “A Book in Memory,” a serene rock ballad that softly brings listeners to tears. With “Rain To Be,” Onewe wants to be “daring.”

“The song has the fastest tempo among any of the songs from Onewe,” said Kanghyun. “We’ve dared to do things we’ve never tried before in all ways, including the performance, theme and music.”

“Planet Nine” is the band’s first music of 2021, but the members said they want to fill the year with more songs and interaction with fans. Covid-19 still keeps fans and artists away from each other, but members hoped to hold offline performances by the end of the year to meet fans in person.

“We want to spend the rest of 2021 with days that we don’t regret,” said Dongmyeong.

“We hope that this EP brings those days for both Onewe and Weve, and we promise to try our best,” he added, referring to the band’s fan club.

Global K-pop fest KCON to be streamed online next month