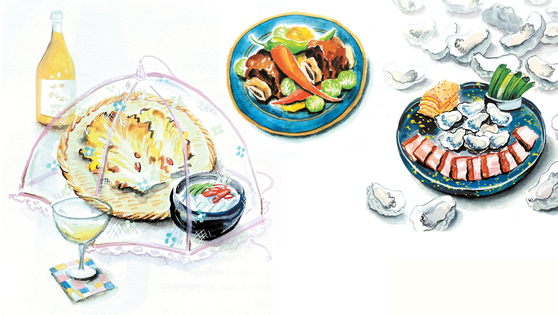 
Like wine and Korean food but struggle when it comes to putting the two together? Worry no more, as Poets & Punks, a London-based publishing company, has released recipe book “Anju and Banju” that focuses on pairing a bottle of vino tinto with a plate full of hansik.

"Anju and Banju" focuses on the food that Koreans usually enjoy eating when they drink, and also suggests certain bottles of wine that pair well with each and every dish. Recipes are also tailored for people cooking in Britain or elsewhere overseas, offering some exotic bites to match drinks that might be easy to find at the local bottle shop.

Anju is a Korean term used to indicate any kind of food you choose to eat when drinking, while banju describes the act of eating and drinking together. It is the first book the publishing company has released since its establishment.

With the growing popularity of natural wine in Seoul, the book focuses on suggesting such wines that can be best paired with each recipe. This juice-like, fruit-forward style of wine has been widely welcomed by drinkers in Korea, especially when eating dishes with more pungent or stronger flavor combinations including kimchi and other fermented sauces like doenjang (soybean paste) and gochujang (hot pepper paste).

“We want to dare to say that the combination of these food and natural wine makes a part of what we now call Seoul’s food culture,” said the publishing house.

“The look of a tabletop mixed with traditions seen from something old and something more modern seems to really represent how open Seoulites are to embracing new cultures, and we wanted to place a new light on that tabletop in our own way and spread the word on it to the world.”

The recipes were created by chef and owner Woo Jung-wook of restaurant Superpan, who built up a following holding a variety of cooking class in central Seoul’s Ichon-dong in Yongsan District.

A native to Seoul and raised by a mother who was also born in the city, Woo has picked up the subtle difference in flavors in dishes that are widely enjoyed by Seoulites.

With people from many different cultural background gathering in the capital city and looking for different cuisines for their daily meals, many who have tried her food told Woo that it has taken on a multi-cultural feeling with a hint of something Korean, Japanese, Chinese and even Western.

“What I have learned and practiced is food widely enjoyed in Seoul,” said Woo, who tried to choose dishes that are easy to make yet obviously Korean, such as bulgogi, kimchi fried rice, and namul, or seasoned vegetables. She said what she craves is the essence of hansik, or Korean food, and wants to expand the scope of it by taking a “bold step” to recommend small bites as tapas to accompany natural wine.

“For some dishes, I tried to keep the essence of what’s Korean while the look of it seems international, so that the overall feel of the dish is not too exotic and unfamiliar.”

The book is divided into four chapters to introduce food well paired with bubbly, white, red and rose, as well as orange wines.

In between each chapter, a couple of pages delve deeper into specific foods like namul, or techniques like braising meat or boiling Korean broths and stocks. These sections are intended to help readers better understand some of the most common styles of food in Korea.

Instead of including the actual photos of food and wine, the publisher took a leaf out of the recipe books of old, using illustrationg images so that chefs anywhere in the world can work their imagination to make their own version of the Seoul food.

Woo also carried this sentiment into her recipes.

For what’s commonly called rospyeonchae in Korean, which is thinly-sliced seared beef, she added apple and gruyere cheese to make the dish similar to the possible more familiar beef carpaccio.

And for bulgogi, instead of the commonly known version made with grilled beef slices and green onions in a sauce, she suggests stirring the beef in a pan until most of the liquid evaporates to make it crunchy. Searing the cooked beef further with a kitchen blowtorch at the end for extra crispiness is also recommended after you put the beef on top of mashed potato so that you can have a mix of different textures in the mouth.

The recipe for seoritae mascarpone spread, a spread made with mascarpone cheese and black beans that is the best-seller at Woo's restaurant, is included in the book. She also suggests using doenjang alongside ingredients more commonly found overseas such as okra, to make sweet and savory salad swith nuts and raisins.

“I like changes, and I like making changes,” Woo said. “I would like to continue learning what’s changing to continue infusing new inspirations into my dishes.”

“What I crave is the essence of hansik, and I want to expand the scope of it,” she said in the book.

anju and banju poets and punks