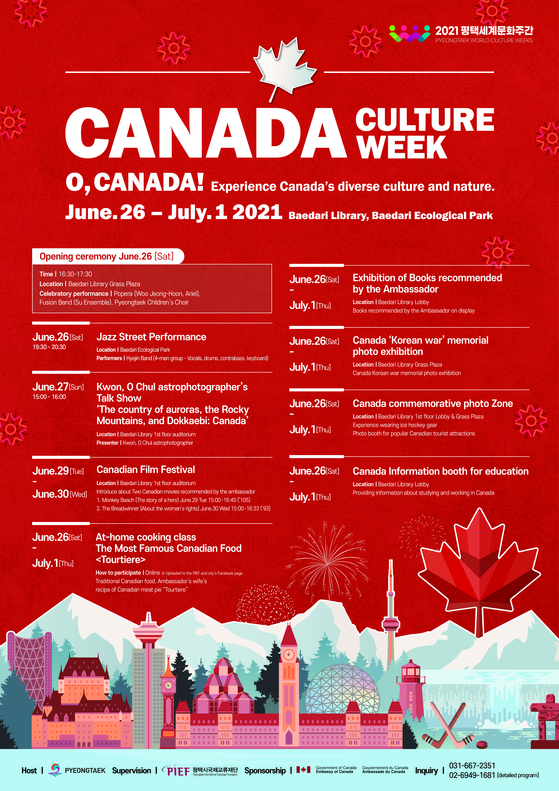 
Canada Culture Week, a week to celebrate and experience the music, photography, films, cuisines and literature of Canada, will kick off in Pyeongtaek, Gyeonggi, on Saturday.

The week will launch with the opening ceremony on Saturday at the Baedari Library Grass Plaza, joined by the Pyeongtaek children’s choir presenting a folk song from Canada.

On Tuesday and Wednesday, Canadian films “Monkey Beach” (2020) and “The Breadwinner” (2017), recommended by the ambassador of Canada to Korea, will be screened at the library from 3 p.m.

For the duration of the culture week, there will be an online cooking class on Canadian meat pie Tourtière hosted by Stephanie Danagher, wife of Ambassador Michael Danagher. Participants can access the cooking class via PIEF's website or Pyeongtaek city’s Facebook page.

From Saturday through July 1, the library will host a special photo exhibition to remember the Canadian veterans of the Korean War (1950-53).

“Pyeongtaek will be hosting a multitude of international cultural fairs with the embassies of Canada, the Czech Republic, Russia, the United States and South Africa, through November, to bring a variety of culture and values closer to the heart of the Pyeongtaek residents,” the city government said in its statement.