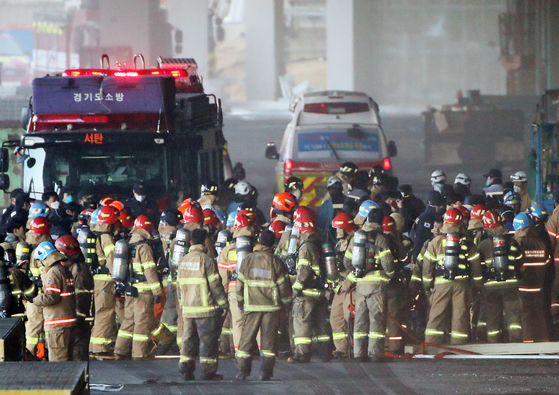 An ambulance carries firefighters who went missing in a fire that started Wednesday night at a refrigeration warehouse construction site in Pyeongtaek, Gyeonggi. [YONHAP]


Three firefighters that went missing Thursday at the scene of a fire in Pyeongtaek, Gyeonggi, were found dead Thursday afternoon.

Two were found at 12:22 p.m. on the second floor of a seven-story refrigeration warehouse construction site and the other at 12:41 p.m. nearby, according to the fire department.

Communication with the three was cut off around 9 a.m. after they searched for people inside the construction site for about an hour. Two other firefighters with them got out and were sent to the hospital for smoke inhalation.

The three were found with emergency safety equipment including an air tank that could last up to 50 minutes. They are believed to have been trapped by flames.

The fire was first reported at 11:46 p.m. Wednesday, and the fire department issued a level-one warning, dispatching all firefighters from the nearest station. The warning was lifted at 7:10 a.m. Thursday after the core flame was extinguished around 6:32 a.m. Firefighters thought they had the blaze under control, so five went inside to look for survivors.

A level-two warning was issued at 9:21 a.m. after it was clear they were trapped inside. More manpower and equipment came from nearby fire stations.

“It is heart-breaking to hear the news of three firefighters who died doing their duty,” said President Moon Jae-in on Thursday. “I express deep condolences to the families of the deceased who put themselves in the frontline to keep people safe.”

The families of the deceased reportedly are considering a joint funeral.

The police and fire department will investigate the caused of the fire and whether the building is safe.

On Dec. 20, 2020, five workers fell over 10 meters from the fifth floor of the same building and three died. They were working on the ceiling of a car park on the fifth floor when a concrete structure collapsed.

In June, one firefighter was killed in a blaze that tore through Coupang’s Deokpyeong Logistics Center in Icheon, Gyeonggi.