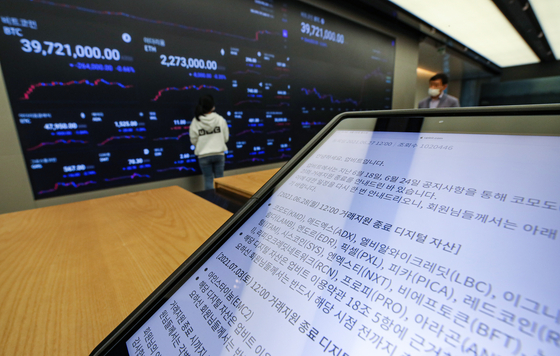 A tablet PC at Upbit lounge in Gangnam District, southern Seoul, on Monday displays a notice of the exchange ending trading of 23 coins from noon that day. While the exchange announced plans to delist 24 coins on June 18, trading of one more coin will end on July 3. [YONHAP]


As crypto exchanges give altcoins the old heave-ho, there’s a method to their madness, literally.

In deciding what exchange with which to establish full account relationships, banks are taking a close look at the origins of the coins traded and the backgrounds of the traders.

Exchanges that want to survive have to tick the right boxes, and that means getting rid of coins that would not pass muster.

According to the office of Rep. Yoon Doo-hyun of the main opposition People Power Party Monday, a guideline crafted by the Korea Federation of Banks in April to assess the business stability of cryptocurrency exchanges advises banks to check how many coins the exchanges support, especially the number of coins with low ratings.

The guideline is an important standard banks will base their assessment on when choosing whether to partner with a certain cryptocurrency exchange and issue real-name bank accounts, accounts in the name of the actual trader, for users on the exchange. The partnership is a must for local cryptocurrency exchanges to maintain their business under the amendment to the Act on Reporting and Using Specified Financial Transaction Information that took effect earlier this year. The exchanges have until Sept. 24 to ink a partnership.

Under the current guideline established by the federation, cryptocurrency exchanges supporting many coins are considered a higher risk in business compared to those supporting fewer coins, according to Yoon. The exchanges are seen very risky if they support many coins with low ratings.

The coins were graded based on ratings provided by Xangle, a public data disclosure platform for the global cryptocurrency market. Bitcoin is rated AA+, the highest rating among cryptocurrencies. Ethereum was rated AA, the second-highest.

The guideline is likely to have pushed local cryptocurrency exchanges to drop less well-known and underperforming altcoins, which are coins other than bitcoin.

The countries were divided into four groups depending on their risk level related to money laundering. Jobs were largely divided into 38 categories and four risk levels.

Those working for loan sharks and gambling industry were considered to carry the highest risk. Public servants, lawyers, judges and prosecutors as well as doctors are low risk.

"It seems the recent delisting of coins at local exchanges were driven by this guideline," Yoon said. "However, most operators of small exchanges and users on the exchanges are not aware of how a coin's credibility and risk levels are graded under this guideline. The Korea Federation of Banks should open up its guideline to let them understand how the fate of crypto assets and exchanges are decided."

As much as exchanges are facing difficulties finding banks, banks are having trouble entering partnership with the exchanges on possibility they will be held responsible for system glitches and fraudulent activities, such as money laundering, at exchanges they are partnering with.

"Sometime in the future there may be a time cryptocurrencies are traded under a regulated financial system, but for now it’s like running the risk of being related to potential financial crimes," a source from the banking industry said.

The Korea Federation of Banks and its member banks have reportedly asked the country's financial regulators to come up with a guideline to keep banks from being held responsible for financial crimes or accidents at exchanges even after partnering with them, if the banks were not related to the crime.