Israeli start-up tackles carbon and Covid at the same time

Israeli start-up tackles carbon and Covid at the same time 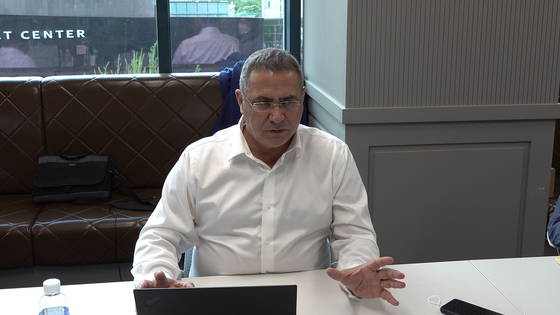 Marat Maayan, CEO and founder of Airovation Technologies, speaks during an interview with the Korea JoongAng Daily on Tuesday last week at the office of Yozma Group Korea in Gangnam District, southern Seoul. [SEO KYUNG-WOO]

Over the past year and a half, the primary task of global governments, companies and the public has been fighting against a respiratory virus that completely reshaped people's daily lives.

The coronavirus pandemic has forced people to wear masks, reduce social interactions and be highly conscious of whether the air they're breathing in is safe — free from the virus and other pollutants.

That crisis, however, was an opportunity for some.

Airovation Technologies, an Israel start-up focusing on air purification and carbon capture and utilization technology, was one of those businesses that was re-evaluated during the pandemic era.

The start-up developed technology that can remove not only fine dust particles, but also carbon dioxide and microbiological pathogens, from indoor air in partnership with Israel's Hebrew University. According to the start-up, its technology doesn't simply filter our harmful particles in the air. It is able to convert carbon dioxide into oxygen and a mineral byproduct.

"Microbiological threat wasn't an issue," said Marat Maayan, CEO and founder of Airovation Technologies, as he sat down for an interview with the Korea JoongAng Daily on Tuesday in Seoul. "Then the coronavirus came, shaking all of us drastically and creating a situation where air is not something we can take as granted. It was an opportunity [for us.]"

The start-up was originally founded in November 2013. At the time, it focused on converting toxic smoke from fires into breathable air.

From 2017, it broadened its scope of air purification in partnership with scientists from the Hebrew University, including Prof. Yoel Sasson, and ventured into eliminating the Covid-19 virus from indoor air in 2020.

It has now developed a device, that looks similar to an air purifier, but can also capture carbon dioxide indoors. This device can significantly lower the level of carbon dioxide in a room in just several minutes. 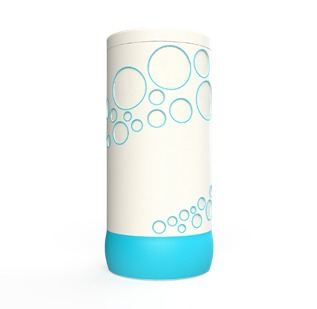 
From July last year, it collaborated with Israel's Hy Laboratories, a diagnostic company in the field of microbiology such as infectious diseases, and conducted a live test, eliminating over 99.97 percent of the virus from the air, according to the company.

"Not many companies around the globe can show that their technology was tested against the real coronavirus," Maayan said.

As carbon neutrality, or achieving net zero carbon emissions, became a global goal, it was a natural step for the company to extend its business to carbon capture and utilization for the industrial sector.

"The awareness of carbon capturing is a great opportunity for us," the chief executive said. "And the field we will like to implement [our technology in] is mainly at hydrogen and ammonia manufacturing sites."

The start-up, as of last week, has attracted $11.5 million of investment into its business since foundation, with Yozma Group Korea, the Korean branch of Israel's venture capital firm Yozma Group, participating in Series A funding.

The start-up's latest visit to Korea comes as it prepares to expand in two areas — indoor air purification and carbon capture — by finding the right partners. It is also taking part in NextRise, a global start-up conference that takes place for two days from today in Seoul, hosted by a group of institutions including the Korea Development Bank and the Korea International Trade Association. 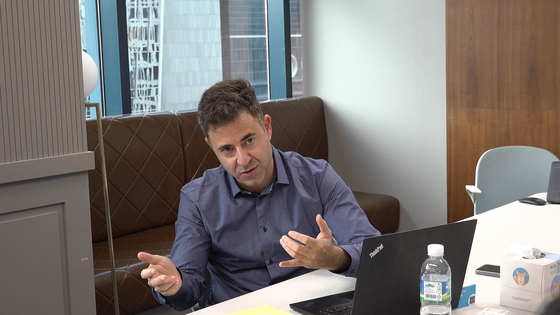 The following is an edited excerpt of the interview with the start-up's CEO and Gil Tomer, the chief operating officer and co-founder.


Q. What made you start developing this technology, even before the outbreak of the Covid-19 pandemic?

A. The company started with a vision of mine to create public safety technology, after a long service in the military. All of us [in Israel] do [military] service like in Korea. I served for 27 years. Taking toxic smoke in case of fire and changing it to breathable air, this was the first goal of the company. We got support from the Innovation Authority of Israel that finances us and additional investors.


Q. How can you convert carbon dioxide into oxygen and a mineral byproduct?

Scientists from the Hebrew University have been working on superoxide radicals for almost a decade.

We brought two different formulas [so that] this superoxide radical exists in the liquid phase for enough time that when we pass polluted air it manages to mineralize the air, and the end product is minerals, oxygen and water.


Q. You mentioned your device can also make air safe from the coronavirus

Yes, using exactly the same technology. In the end, coronavirus is much bigger than the carbon dioxide molecules, though size doesn't really matter. It is engaging on the molecular structure [of the virus.]


Q. What is your business model?

We have two verticals.

On the [indoor air purification side] or the home appliances vertical, we are mainly going to license our technology to partners, regional and global partners. We will provide the technology to the engineers of our partners so they can develop the final product.

We know how to create uniqueness, from zero to one. [Our partners] will take that one to a hundred. We are aiming for the future, when [someone] comes into his room or his office, our system will take his bio markers and adapt the internal [air] condition for him.

On the carbon capturing side, things are a little different.

Gil: On the industrial business model, we are considering a build-operate-transfer (BOT) model by forming a consortium with builders and chemical logistics companies. But we are considering diverse lines of revenue from different angles, such as earning revenue on mineral [byproducts], loyalties and carbon incentives. That depends on the regulations.


Q. Are there any ongoing projects in the carbon capturing business side?

We are now scaling our mid-scale prototype to pilot at a hydrogen factory in Israel and holding discussions with another site overseas. After the pilot stage, we will scale to a beta site, with a container-sized purification module. But those two elements are now also creating a lot of interest in companies in Korea.


Q. What brings you to Korea?

I think the Korean market is open to innovation and the adoption of new technology. It is also very aware of issues related to health and well-being.

When we look at Korea I see unbelievably huge companies. Global conglomerates. The scale of capability of Korea is amazing. I can't understand how it is happening. Korea is only about five times bigger than Israel.

I think Korea is a very good partner that can take innovation from Israel, which is very gifted in the first step, to the global scale.

And in some sense it is happening now with us.


Q. Do you believe carbon neutrality is achievable?

I think it can be achieved, from a combination of finding new sources of energy, this will be the major part of it, but still there have to be efforts to reduce carbon from different manufacturing processes. How much the government creates incentives to ask [companies] to move to carbon neutrality [will matter.] It has to be a global effort. Carbon moves without borders.