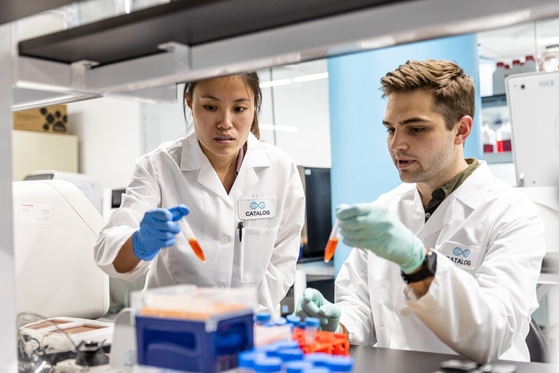 
Hanwha Impact, until recently known as Hanwha General Chemical, took the lead in investing $35 million in Boston’s Catalog Technologies, a data storage technology company, in a funding round announced on Tuesday.

The company neither revealed its shareholding in the company nor other investors, only saying it is the largest investor in the series B funding.

According to trade press reports, Hong Kong’s Horizon Ventures is also an investor.

Founded in 2016, Catalog Technologies specializes in DNA-based digital data storage, a technique that encodes images and pages of text as DNA.  Unlike the conventional storage systems that encode the information as a series of 0s and 1s, the DNA-based platforms use the four nucleotides that make up the genetic code: A, T, G, and C.

The approach is considered a breakthrough in dramatically improving energy efficiency and security of data storage compared to the widely-used storage media, like magnetic tapes.

Hanwha Impact cited the surging demand for data storage as the reason for the investment, adding that Catalog managed to bring down the costs required for the technology.

“The recent investment will help Hanwha Impact foster new business opportunities in bio and next-generation computing, the sectors heavily dependent on data technologies and lead innovation in the industry,” the company said in a statement.

This marks the first investment since the company was renamed Hanwha Impact from Hanwha General Chemical last month to emphasize its new focus on making investments that will have a positive and sustainable impact on society.