National Treasure No. 1 may lose its crown

National Treasure No. 1 may lose its crown 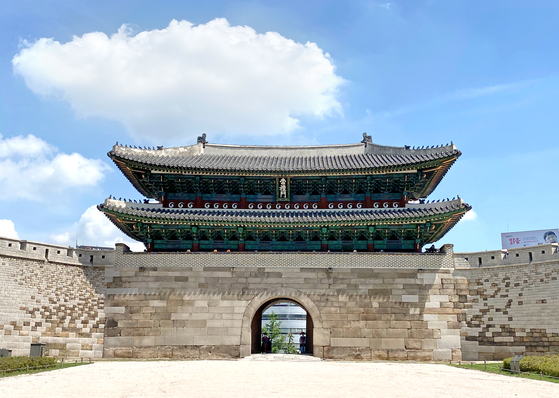 Sungnyemun Gate, also known as Namdaemun, may no longer be referred to as Korea's National Treasure No. 1. [CHOI JEONG-DONG]


Korea’s National Treasure No. 1 is Sungnyemun Gate, which was restored in 2013 after being partially destroyed in an arson attack in 2008.

Although the numbering system was introduced for "mere administrative use," the historic gate, also known as Namdaemun, has been the subject of heated debate, especially after its restoration. Some civic groups insist it lost the No. 1 title, arguing that the Hunminjeongeum Haerye, a guide to the Korean Alphabet invented by King Sejong, deserves the top slot. It is currently National Treasure No. 2.

Such debate may no longer be necessary or even possible. The Cultural Heritage Administration said Monday it plans to revise the cultural heritage management system that assigns numbers to cultural properties such as national treasures, treasures, monuments, historic sites and so on, within this year. The system was first introduced in 1933 during the Japanese colonial era.

“The designation numbering system has been used for administrative efficiency but it’s constantly causing unnecessary controversy and misunderstandings regarding the importance of the cultural properties,” Lee Jae-won, spokesperson for the administration told the JoongAng Ilbo. "We believe the revision needs to be carried out promptly."

The announcement will be made through the official gazette on Thursday. The decision may be finalized within this year after canvassing public opinion for 40 days followed by a review by the National Assembly.

If this goes through, Sungnyemun Gate will lose the No. 1 title it has kept for the past 87 years and called simply “National Treasure Sungnyemun.”

In 1934, a year after introducing the order to manage Joseon’s cultural properties, the Japanese Government-General of Korea designated a total of 169 things as items of cultural heritage (153 treasures, 13 historical documents and three natural monuments), using the numbering system for administrative convenience. It assigned No. 1 to the southern gate of the capital, Namdaemun, and awarded No. 2 to the eastern gate, Dongdaemun (also known as Heunginjimun Gate, which is currently Treasure No. 1).

After liberation, the culture bureau under the Ministry of Education put an additional 592 items onto the cultural heritage list. It was then that the National Treasure category was first introduced, raising the status of some former treasures, including Namdaemun and Dongdaemun gates.

The administration said Monday that the public misunderstood the numbers and awarded them too much significance.

They became a “golden rule” because they were often used together with the name of the property in textbooks and on signboards. Going forward, the numbers will gradually be removed from official documents and public signage -- and only be used for internal use.

Accident at the shrine