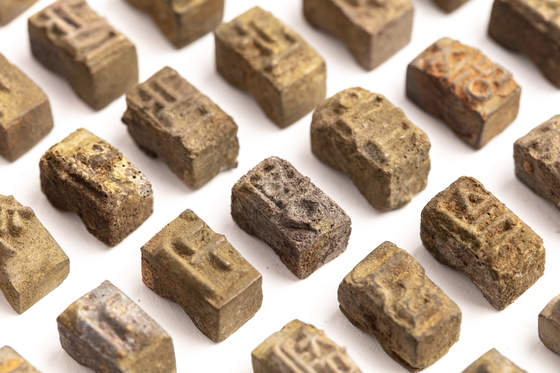 About 1,600 pieces of metal movable type were found inside a pot excavated recently in Gongyeong-dong, central Seoul. [CULTURAL HERITAGE ADMINISTRATION]


The Korean alphabet, called hangul, is recognized globally as one of the most creative phonetic systems in the world. The current hangul system is composed of 24 basic letters, but it wasn't always this simple. The modern orthography we use today is not entirely the same as what King Sejong (1397-1450) drew up back in 1433.

Two documents dating from the Sejong era offer crucial insight into the early days of hangul. The first is "Hunminjeongeum," which describes everything there is to know about the new writing system. Alongside "Hunminjeongeum," King Sejong also ordered the creation of "Donggukjeongun," a dictionary of Korean pronunciation that set out the standard practice for pronouncing Chinese characters in Korean.

"Donggukjeongun" served as a companion to "Hunminjeongeum," but quickly fell out of use in the 15th century as the style of the alphabet changed, rendering the pronunciation guide obsolete.

Until now, the hangul alphabet as depicted in "Donggukjeongun" has existed only in printed documents, but never as metal movable type.

On Tuesday, the Cultural Heritage Administration (CHA) announced that it has made the unprecedented discovery of about 1,600 pieces of metal movable type, inside a pot. About 1,000 of them are of Chinese characters and 600 are hangul. 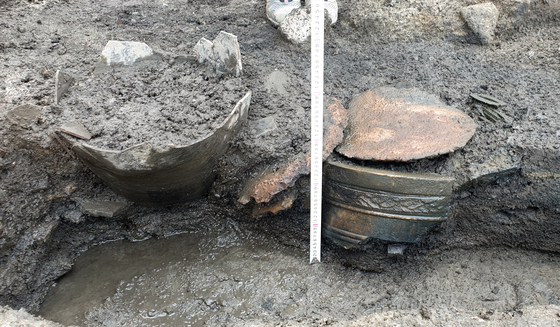 The metal movable type was found inside a pot and other relics were found around the pot. [CULTURAL HERITAGE ADMINISTRATION]


The type was unearthed during an excavation project as part of the “Urban Environmental Maintenance Project in Gongpyeong-dong,” headed by the Sudo Research Institute of Cultural Heritage under the CHA’s authorization. The site is located west of Tapgol Park in Jongno District.

“This is the first excavation case in which various metal movable type from the early Joseon era (1392-1910) has been unearthed in one place in such numbers, not to mention them being the earliest hangul metal movable type that reflects the writing system at the time of creation,” said an official from the administration. “We have not yet finished analyzing them, so there’s the possibility of identifying the type blocks that were actually used in documenting some of the early Joseon documents.”

Though more research has to be carried out, Baek Doo-hyun, professor of Korean Language and Literature at Kyungpook National University, said he believes many of the discovered hangul type created in 1460 (known as Eulhaeja type) was used to print "Neungeomgyeongeonhae," a Korean annotation of Buddhist scriptures printed in 1461 by King Sejo at the behest of his father King Sejong.

Eulhaeja is the earliest known metal type blocks used in the Joseon Dynasty and until now, only 30 type blocks in hangul were in the National Museum of Korea’s collection.


About 10 pieces of Yeonju metal movable type, which has two hangul letters transcribed in one block, have also been discovered. The two letters are usually particles, serving as a conjunction to connect two sporadic letters.

According to Baek, such two-letter particles were created as a single block for convenience as they were often used between Chinese characters.

Some of the metal movable type blocks in Chinese characters are also noteworthy as they are presumed to be created in 1434 (known as Gapinja type) during King Sejong’s reign. If it is confirmed to be Gapinja type, it will be the oldest type ever discovered, made roughly 21 years earlier than Eulhaeja.

“Then we have to rewrite the history of typography,” said Ok Young-jeong, a researcher at the Academy of Korean Studies. 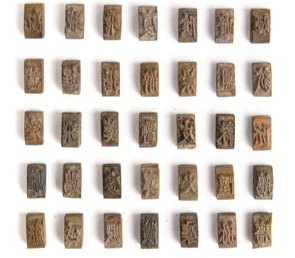 The excavated type bocks include ones that are presumed to be Gapinja, created in 1434 under King Sejong's orders. [CULTURAL HERITAGE ADMINISTRATION]


Gapinja, created in 1434 under King Sejong’s orders, is said to be the type that had the most perfect form, Lee Seung-cheol, a researcher at the Unesco International Centers for Documentary Heritage also said.

“It is an important relic that showcases the development of Korea’s movable metal type casting technology that continued to develop since ‘Jikji Simche Yojeol’ (1377), the book historians believe to be the first known use of movable metal type.”

The Cultural Heritage Administration said the recently excavated type dates back to the 15th century and are of high enough quality and value to be designated as a National Treasure or Treasures. Most pieces were intact, said the administration, though some of them appeared to have melted in a fire and got stuck together. They were used for about 100 years before getting buried at the site until being discovered recently.

Other important relics were also excavated from the site, including small firearms known as chongtong, an ilseongjeongsiui (an astronomical clock for the day and night), a bronze bell, and jujeon (a visual scale to indicate the time on a water clock). 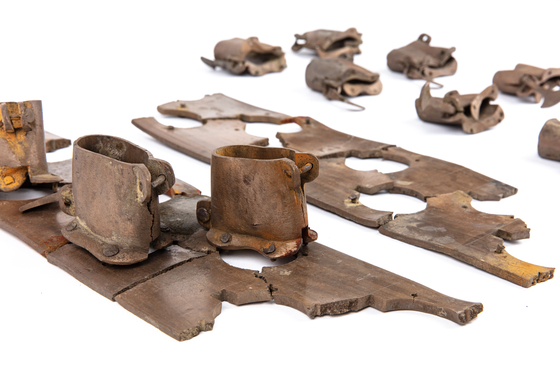 Jujeon were cut into fragments and found inside the pot together with the movable metal type. The final form of these copper pieces, when pieced together, corresponds to the record of jujeon that is documented in “The Chronicles of Sejong,” according to Yun Yong-hyun, a researcher at National Science Museum, adding that the discovery is significant, though in pieces, as “the only handed down record of jujeon so far were written documents.”

Ilseongjeongsiui was discovered next to the pot. It was used as a sundial during the day and used to estimate time using constellations at night. According to “The Chronicles of Sejong,” King Sejong made four ilseongjeongsiui in 1437. Only the main body has been found, but it too is the first actual relic to be discovered.


According to the administration, the relics, except the metal movable type, were deliberately broken into fragments to appropriate sizes and then put into the pot and buried together or next to it.

Why were such important relics buried in large quantities at a non-royal site in the first place? 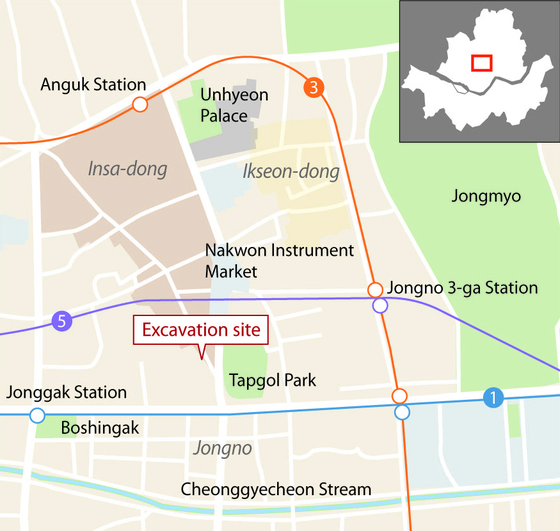 Experts were also surprised upon discovering the literal treasure trove, although the site used to be the center of Hanyang, the city that later became Seoul.

“We only completed the first phase of research, but no matter how much I looked at the documents related to the early and late Joseon periods of this area, I could not find any records about locating government offices or palaces here,” said Oh Gyeong-taek, director of the Sudo Research Institute of Cultural Heritage.

“I believe yangban [the ruling class] lived there as well, but it was mostly the descendants of commoners who lived there mainly, near the marketplace. So it’s a surprise as to why such important relics were buried underground at a site that used to be home to common people.”

The Cultural Heritage Administration said more studies on the relics and the reason behind the burial will be carried out in the near future. The relics are currently housed at the National Palace Museum of Korea in central Seoul.