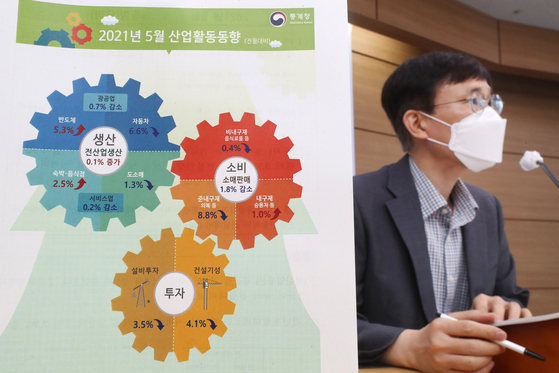 Industrial production rose 15.6 percent in May on year, Statistics Korea reported Wednesday, the fastest rate since June 2010. On month, it fell 0.7 percent.

While the economic recovery remains strong, the base effect from the dramatic fall early last year skewed on-year numbers upward, while the tempering of the dramatic rebound earlier in the year and noise in the statistics during the comeback led to choppy on-month figures, especially in terms of consumer spending.

“There have been several adjustments to the month-on-month comparison, but overall we believe the recent momentum being maintained,” said Eo Woon-sun, a senior official at Statistics Korea’s short-term economic statistics department.

Exports in May rose 45.6 percent year-on-year, the fastest growth in 32 years. It was the second consecutive month in which exports have grown more than 40 percent, a first.

Industrial output, a broader measure that includes fishery and forestry, construction, service and public administration activity, was up 7.3 percent on year and up 0.1 percent on month.

Service activity rose 4.4 percent, though it was down 0.2 percent on month.

Retail sales increased 3.1 percent on year. On month, it was down 1.8 percent.

The manufacturing operating rate in May was 73.8 percent, the same as in April. Facility investment in May was up 11 percent on year and down 3.5 percent on month.

In a release Wednesday, the Finance Ministry agreed with the statistics agency’s assessment, adding that production and spending will increase as more people are inoculated.

Earlier this week, the government announced its plan to boost the domestic economy by encouraging spending.

One of the tools it is employing is the distribution of relief funds, much as was done in May 2020.

While the grants last year were given to every household, the latest, funded through the 33 trillion-won supplementary budget, will exclude the top 20 percent by income.

The amount of the grant has not yet been determined.

Those excluded will still benefit from a cash-back program on credit card spending that will be temporarily run for three months and also funded through the supplementary budget.

When spending by credit card more than in the previous month, a person can get up to 10 percent back to a maximum of 100,000 per person.

By boosting spending, the government is targeting faster economic growth. It is now forecasting 4.2 percent GDP growth in 2021.

This is up from 3.2 percent of the initial target.

If so it would be the fastest growth since 2010.