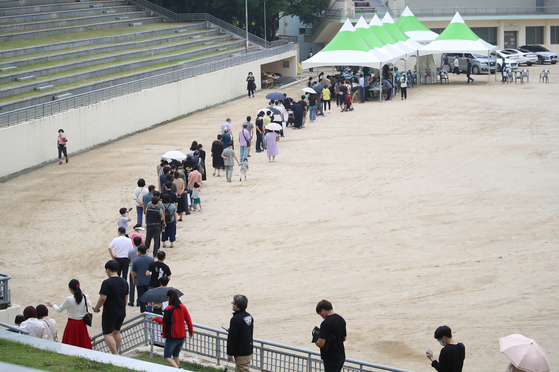 People stand in line to take coronavirus tests at a screening clinic in the southeastern city of Daegu on Monday. Korea's daily new virus cases spiked to an over two-month high as a series of cluster infections were reported in the wider Seoul area amid jitters over growing Covid-19 variant cases. [YONHAP]


Seoul, Gyeonggi and Incheon will postpone the relaxing of social distancing rules to next week as daily new Covid-19 cases spiked to an over two-month high.

The eased social distancing measures in the greater Seoul area, where more than half of the country’s 52 million population live, will thus be postponed by a week to July 8.

A revamped social distancing system, which was supposed to start Thursday, would have allowed private meetings of up to six people for two weeks and gradually expand that to eight. Restaurants, cafes and bars were to be allowed to stay open until midnight, while curfews on other businesses were being completely lifted. All of these are postponed a week.

The postponement came after 794 new Covid-19 cases were reported nationwide Wednesday, the highest since April 23.

More than 80 percent of new virus patients Wednesday were in the Seoul metropolitan area: Seoul added 368 new cases, its highest number of infections this year, followed by 234 in Gyeonggi and 29 in Incheon.

The spread of highly contagious variants seemed to be a factor in the rise of cases, although an analysis of variants was not immediately available for Wednesday's figure. Breakdowns are usually revealed once a week on Tuesdays.

Health authorities said Wednesday that the Delta variant was found in a cluster of infections tied to foreign teachers at English-language hagwon (cram school) in several cities in Gyeonggi, which increased to 213 people. The Delta variant has been common in India.

The infections spread to students and their families, many kindergartners or younger elementary school students, as well as patrons of nearby restaurants and bars in Mapo District.

“We have identified an epidemiological relationship between the [pub] in Mapo District and the English hagwon, and thus monitoring related people as a big group,” said Park Young-joon, head of the epidemiological investigation team at the Korea Disease Control and Prevention Agency (KDCA), said in a briefing on Wednesday.

"La Bamba is the place where the first confirmed person was known to have visited, which is a restaurant that is being operated in the form of a pub," Park said. "Many confirmed cases were found while conducting tests among visitors here, and they scattered in groups and visited nearby restaurants and bars."

Authorities added most of the increase in infections involved people in their 20s to 50s who have yet to be vaccinated, and urged people to maintain social distancing rules.

“Infections are increasing primarily among young people who haven’t been vaccinated, which is driving the increase in the number of patients," said Yoon Tae-ho, a senior Health Ministry official during a briefing on Wednesday. "Special attention is needed for residents of the Seoul metropolitan area.

"On the other hand, vaccination are reducing infections among the high-risk group of people in their 60s and older, and their infection rate remains below 10 percent of all patients," Yoon added. 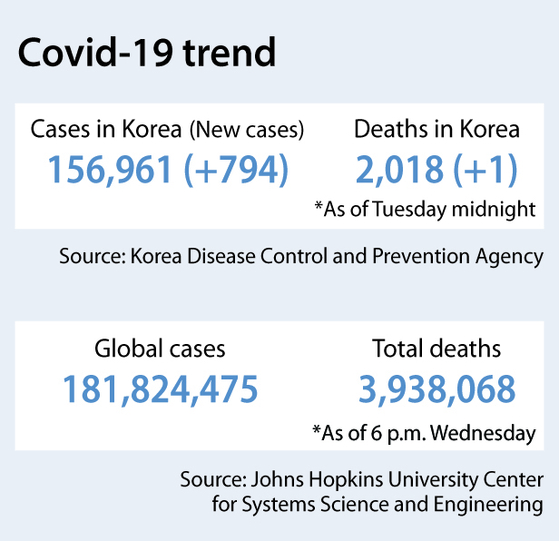 While the greater Seoul area will keep its current social distancing scheme, the rest of the country will be under Level 1 of the new system starting Thursday — where private gatherings of up to eight people will be allowed and won’t be any business curfews. The limit on gatherings is planned to be completely lifted after two weeks.