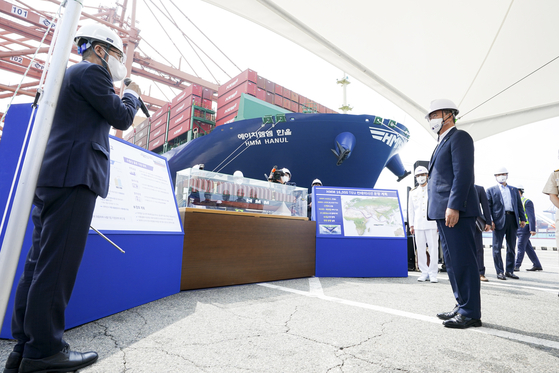 President Moon Jae-in, right, is briefed on Korea's trade at an event celebrating the departure of HMM’s Hanul container ship from Busan to Europe at the Busan New Port on Tuesday. [YONHAP]


Exports broke $300 billion for the first time ever in a January-to-June period as global demand rebounded, with an annual record very possible given the trend and the outlook in foreign markets.

According to the Ministry of Trade, Industry and Energy on Thursday, in the first half of 2021, Korea’s exports hit $303.2 billion, up 26.1 percent on year.

It was the fastest on-year growth in 11 years.

The previous record for total exports was in the first half 2018, when $296.7 billion was achieved.

If the trend continues, a full-year export record is possible, breaking the $600 billion of 2018.

In a statement, the ministry noted that the exports are recovering faster than after any previous crisis, with all the ground lost won back in the last two quarters of 2020. 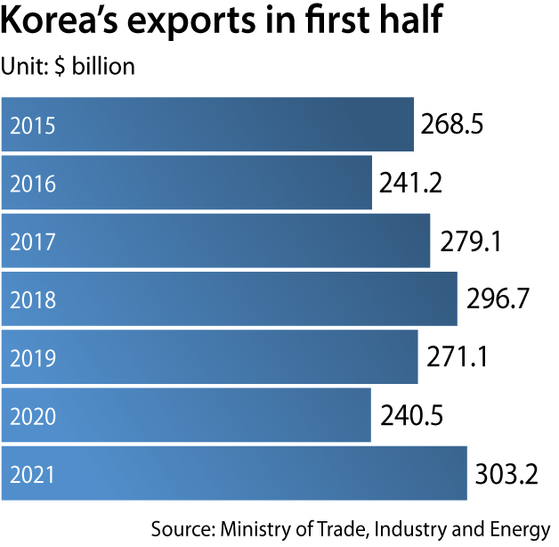 Robust exports in the first half were led by semiconductors, petrochemicals, automobiles and fuel cells.

For the first time since January 2011, exports in 15 key categories increased year-on-year. Of those, 14 have grown for four consecutive years.

In the first half, exports in 13 out of the 15 key categories grew double-digits.

Exports to eight of nine major markets grew rapidly. The exception was the Middle East, where first-half exports were up just 5.8 percent following an 18.2 percent drop in the first quarter.

In the second quarter of 2021, exports to the Middle East increased 10 percent, and with oil prices high, sales to this region are expected to remain strong.

Exports to Europe in the first six months of this year were up 44.5 percent to $31.4 billion won, while exports to Asean rose 17 percent to $49.3 billion.

The government emphasized that exports exceeded $50 billion for the last four consecutive months.

Exports in the second quarter were up 42.1 percent on year, while imports rose 40.7 percent on-year.

The trade surplus last month was $4.4 billion, the 14th consecutive month with the statistic in the black.

“We have received the best result in the first half on exports based on our competitive manufacturing industry,” Minister of Trade, Industry and Energy Moon Sung-wook said. “We were able to reaffirm not only quantitative growth but also growth in quality.”

According to a survey released by the Bank of Korea on Tuesday, 93.2 percent of 465 companies, including 340 manufactures, said they have had to purchase raw materials at a higher price than last year, and 83.3 percent said the rising raw material prices are having a negative impact on profitability.

“The government will do its best so that our exports not only recover but achieve a new record this year,” Moon said.