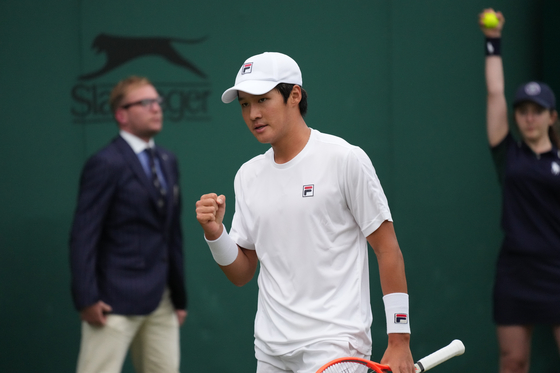 Kwon Soon-woo celebrates winning a point against Germany's Dominik Koepfer during the men's singles second round match on day three of the Wimbledon Tennis Championships in London on Wednesday. [AP/YONHAP]


Kwon Soon-woo was knocked out of the second round at Wimbledon, losing to Dominik Koepfer of Germany after a hard-fought five sets at All England Lawn Tennis Club in Wimbledon, London on Wednesday.

This is the first time Kwon has reached the second round at Wimbledon. In 2019, the only other time he has qualified, he lost to Karen Khachanov in the first round.

This time around, Kwon came back on the court much stronger, beating Daniel Masur of Germany 3-1 on Tuesday to advance to the second round.

Kwon, giving up his first serve to the German, conceded the first set 6-3.

He fought back hard to level the game, pushing the second set to a tie-break with Kwon eventually emerging victorious to win the set after 61-minutes on a 10-8 tie break.

The third set was a repeat of the second set but the other way around, with the German eventually taking the set after a 7-2 tie-break.

Having won two sets each, the game boiled down to the final fifth set.

The two started out each winning their own serves until the German broke Kwon’s second serve game after three deuces.

Though Kwon was able to defend his next four serves, Koefer broke through at the end to take the match after 3 hours and 55 minutes.

Despite Kwon's defeat on Wednesday, he has been playing better than ever with a bit of luck on his side.

This June, he reached the third round of the French Open in Paris, and went on to reach the semifinals of the 2021 Eastbourne International in Eastbourne, England.

Kwon is currently World No. 71, and will now return to Korea to train in preparation for the Tokyo Games.