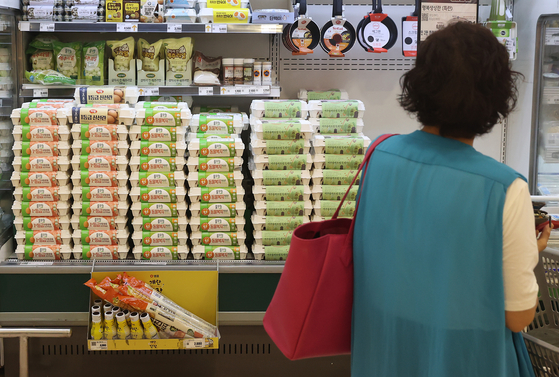 Cartons of egg are sold at a discount mart in Seoul on Friday. Due to a shortage in supply, egg prices rose 54.9 percent in June compared to a year ago, contributing to 2.4 percent inflation last month. Consumer prices have been rising more than 2 percent for three consecutive months. [YONHAP]


Inflation rose more than 2 percent for a third consecutive month in June, raising questions over whether the government will be able to keep the rising consumer price under its target of 1.8 percent by the end of this year.

Consumer prices have been increasing more than 2 percent since April on rising expectations of economic recovery.

Inflation in 2020 rose 0.7 percent. That trend continued in January, when it rose 0.6 percent and gradually moved up to 1.1 percent in February and 1.5 percent in March.

While the rising price of international crude again contributed to raising overall consumer prices, agriculture, livestock and fishery prices were the main factor.

Increases in agriculture, livestock and fishery prices have been in the double digits for six consecutive months.

By item, egg prices rose 54.9 percent, largely due to a shortage of supplies as farms were affected by the avian flu.

Garlic prices were up 47.7 percent.

With rising food prices added to the expectation of easing social distancing regulations thanks to vaccine inoculations, restaurant prices rose 2.3 percent, the fastest increase in more than two years. The last time restaurant prices were up at this rate was in March 2019.

Manufactured good prices were up 2.7 percent largely due to rising fuel prices.

Gasoline prices were up 19.8 percent, while diesel was up 22.4 percent.

“With the economy showing signs of recovery and vaccine inoculation spreading, consumer sentiment has been improving,” said Eo Woon-sun, a statistics agency official. “The three categories — agriculture, livestock and fishery, petroleum and services from the private sector — mostly contribute to June’s 2.4 percent growth but agriculture, livestock and fishery as well as petroleum alone attributed 65 percent to the overall increase in prices.”

The statistics agency, however, said in the second half inflation will likely stabilize as food prices, especially egg prices, ease with supply normalizing and global crude prices to see a slowdown in growth.