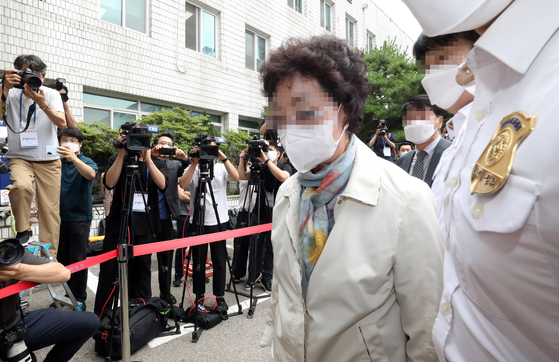 Former Prosecutor General Yoon Seok-youl's mother-in-law, center, enters the Uijeongbu District Court on Friday to attend the sentencing of her trial. She was convicted of fraud and medical law violations and sent to a prison to serve three years. [YONHAP]


Presidential frontrunner Yoon Seok-youl’s mother-in-law was convicted Friday of fraud and medical law violations linked to her hospital business and sentenced to a three-year prison term.

Following the conviction handed down by the Uijeongbu District Court in the morning, the 74-year-old woman, surnamed Choi, was immediately sent directly to prison from the courtroom.

Choi denied all charges throughout the trial, and her lawyer said she will appeal. “We regret that the court ordered her immediate detention,” the lawyer said.

“As I have stressed repeatedly in the past, it is my belief that there should be no exception when we apply laws,” Yoon, former prosecutor general, said through his spokesman after the conviction was announced. 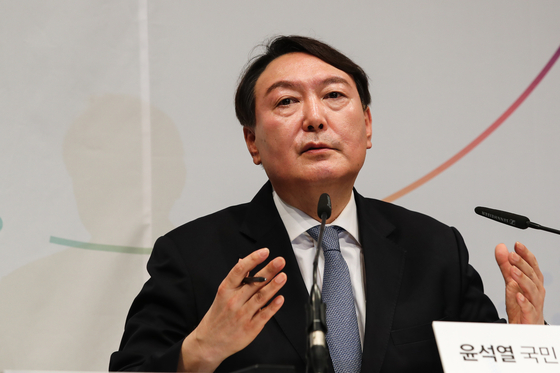 According to the indictment, Choi established a medical foundation with business partners and spent 200 million won ($176,000) to open a nursing hospital in Paju, Gyeonggi, in November 2012. Despite the facility being registered as a nursing home rather than a nursing hospital — and therefore not governed by the Medical Service Act — it received about 2.29 billion won from the National Health Insurance Service over a span of two years beginning in May 2013, according to prosecutors.

Choi’s three business partners were later indicted and convicted in March 2017, but Choi faced no criminal investigation. The prosecutors at the time said she had signed an official agreement in May 2014 that granted her legal immunity when she stepped down as the foundation’s director.

But earlier this year, Jeong Dae-teak, one of Choi's former business partners, and Rep. Choe Kang-wook, head of the Open Minjoo Party, filed criminal complaints to prompt a new investigation against Choi. The prosecution subsequently concluded that she was involved in opening and illegally operating the nursing hospital.

The probe and the indictment took place when Yoon was serving as prosecutor general. Yoon stepped down from the post in March this year and declared his presidential bid on Tuesday.

Within days of his announcement, Yoon has been hit by a series of scandals concerning his family, putting a serious damper on his presidential campaign.

Yoon’s wife, Kim Keon-hee, is surrounded by rumors that she used to work as a hostess at a hotel nightclub before their marriage in 2012. She denied the allegation surrounding her past in a media interview released Wednesday.