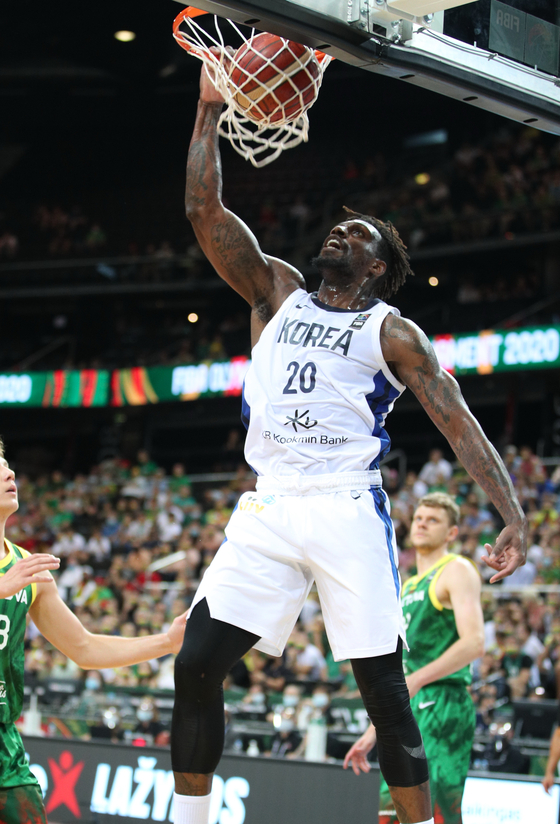 
The Korean national men's basketball team's attempt at earning an Olympic berth has come to a dramatic end, with a 96-54 loss to Lithuania sealing the deal for the struggling Korean squad.

The Lithuanian team started strong, winning the first quarter 28-16. Though Korea put up a fight in the second quarter, Lithuania took it 21-18 to secure a decisive lead.


The third quarter was a complete failure for the Korean side, scoring just nine points to the eastern Europeans’ 27. As Lithuania outscored Korea 20-14 in the fourth quarter, the match finished at 96-57.

Once again, Ra Gun-a led the Korean team as the best scorer, tallying 26 points, 8 rebounds, one assist and two steals.

At the 2020 FIBA Men's Olympic Qualifying Tournament, Korea was in Group A alongside Venezuela and Lithuania, while Group B consisted of Poland, Slovenia and Angola.

The top two teams from each group advance to the semifinals, with only the winner of the qualifiers earning an Olympic berth.


As Korea has no more games left to play, the national basketball team’s attempt to reach on the big stage after 25 years of failing to qualify have once again been thwarted.

The last time Team Korea went to the Olympics was in 1996, at the Atlanta Summer Games.