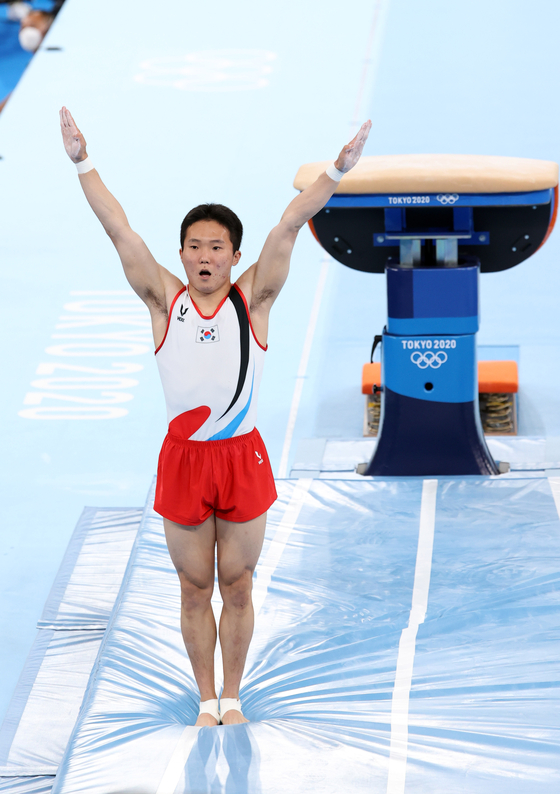 Shin Jae-hwan lands his vault at the 2020 Tokyo Olympics. [YONHAP]

Shin scored a total of 14.783 to take first place. Abliazin, who took silver, had the same overall score, but fell behind Shin when it came to the attempted complexity of his first jump — Shin's was a 6.000 difficulty, while Abliazin's was a 5.600.

Artur Davtyan of Armenia took the bronze medal with a total score of 14.733.

Shin made his Olympic debut in Tokyo. The 23-year-old made his professional debut in 2019 at the Zhaoqing World Cup, where he won silver. He has since won two gold medals at world cup events. Shin is currently the world No. 2 in men's vault.

Shin's victory comes a day after teammate Yeo Seo-jeong won bronze in the women's vault on Sunday, becoming the first Korean woman ever to medal in gymnastics at the Olympics.

Yeo finished in third place with a combined score of 14.733, trailing slightly behind Mykayla Skinner of the United States in second place and Rebeca Andrade of Brazil in first.

During the women's event, Yeo actually pulled off the most technically difficult and highest scoring move of the day, scoring 6.200 for difficulty on her first vault with a 9.133 for execution, combining for a huge 15.333 total. 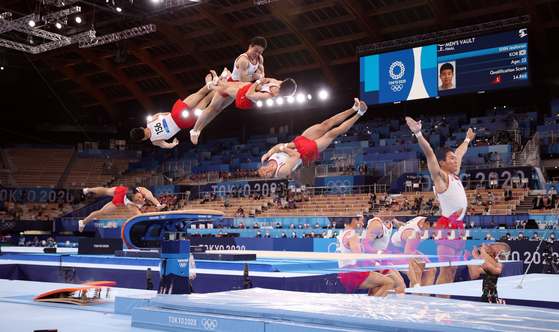 Shin Jae-hwan completes his vault in the men’s individual competition at the 2020 Tokyo Olympics on Monday in Tokyo. [JOINT PRESS CORPS]


Shin copied that success, with his 6.000 first vault tying for the most difficult alongside Adem Asil of Turkey. Unlike Yeo, Shin lost points on execution due to a stumble, ending the vault with a score of 14.733. Asil's was the highest-scoring vault of the day, at 15.266.

Korea has never been a major competitor in artistic gymnastics, but it has repeatedly picked up one or two medals at most Games. Korea failed to medal at the 2016 Rio Olympics, but won gold in the men's vault at the 2012 London Olympics, when Yang Hak-seon scored a total of 16.533.

Korea also took home silver in the men's parallel bars at the 2008 Beijing Olympics, and multiple medals at the 2004 and 2000 Games.

While there was hope that Korean gymnastics would be able to bounce back from the disappointment in Rio, the event wasn't one of the events where the country was definitely expecting to medal. But while the focus in the build up to the Games was firmly on sports like archery and shooting, Korean gymnasts have quickly proven that they are still able to compete on the biggest stage in the world.