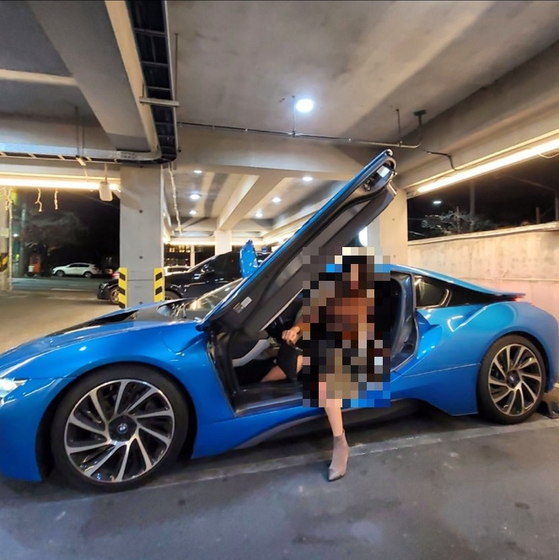 A photo of a 35-year-old woman in Daegu who has been reported by a group of people for allegedly cheating them out of investment money. The woman has been reported to the police, but authorities had not opened an official probe onto her as of press time Monday. The photo was provided by a reader to the JoongAng Ilbo. [JOONGANG ILBO]

Police are looking into complaints about a 35-year-old woman in Daegu who allegedly ran a ponzi scheme after advertising her wealthy lifestyle on social media.

As with all ponzi schemes, she promised high returns, according to a group of people who complained to police on Sunday.

The police estimate the woman may have pulled some 10 billion won ($8.85 million) out of around 160 people.

According to one alleged victim, the woman offered to invest in the stock market on people's behalf. This victim was promised a return of at least 5 to 10 percent every month.

“When I paid her 20 million won the first time, she did keep her promise of paying me the monthly return,” the victim told the JoongAng Ilbo. “After that, I sent her 200 million won. She sent me 16 million won once, but hasn't sent me anything else since, including my original investment.”

According to the victim, the woman posted on social media records of her previous successful stock trades, some of which, the victims claim, were falsified.

The woman also posted photos of herself in sports cars wearing designer clothes and and carrying expensive bags.

It was actually a YouTuber who first pointed out something fishy about the woman’s online postings.

“From 2019, she started sharing only the selling and buying prices from her trades, but not the total profits she made,” said a person who runs a YouTube channel on stock investments on a video posted on June 19. “My suspicions only grew after seeing her postings about her trade results, which seemed quite unreal.”

The YouTuber's comment sparked an online discussion among other people who had suspicions about the woman.

“She is actually a friend of mine, we went to the same school,” said a 34-year-old woman, who has reported giving the woman some 40 million won to invest.

“She kept telling me that she could invest stock for me, and I kept refusing until the Covid-19 pandemic hit my family hard. We decided to take the risk. But she kept breaking her promises of sending us returns, and now, after seeing all the other victims’ reports, we realize she has been running a Ponzi scheme.”

The woman has not returned calls from victims who have spoken with the police.

The police in Daegu told the JoongAng Ilbo Monday afternoon that they are mulling whether to launch a probe of the woman.