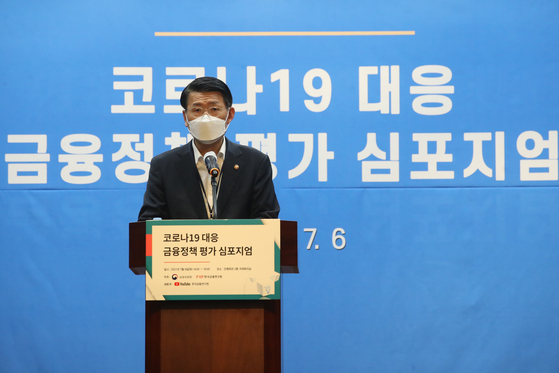 Financial Services Commission (FSC) Chairman Eun Sung-soo warned the private sector to reduce its debt as the world comes out of the pandemic and rolls back easy-money policies.

“The private sector needs to do its own debt tapering,” Eun said during a financial symposium held Tuesday.

He said this includes individual households, which should check their financial soundness ahead of expected hikes in interest rates.

“There should be efforts in normalizing,” Eun said, “[As] there are signals of the global financial situation changing rapidly.”

Korea’s top financial policymaker emphasized that while Korea’s financial system is stable thanks to various financial policies including lowering the benchmark interest rate to a record low of 0.5 percent last year, a global retraction of easy-money policies could bring about a shockwave.

According to the Bank of Korea (BOK), household debt and credit card purchases amounted to 1,765 trillion won ($1,562 billion) as of the first quarter of this year, a record since data started being compiled in its current form in 2003.

When compared to a year ago, that figure was 9.5 percent higher. In the first three months of this year alone, 37.6 trillion won was  added, a 2.2 percent increase.

The ratio of disposable income to household debt in the first quarter was 181.1 percent, which was 18 percentage points higher than a year ago. This indicates that households' debt burden has increased.

Despite government warnings, debt has increasing because people have been taking out loans or purchasing goods on credit because of the difficult times during the pandemic. Some people, especially in their 20s and 30s, have been borrowing money to purchase real estate and stock.

Those trends show no signs of stopping. The Korean stock market on Tuesday again closed at a record high.

On Friday, Finance Minister Hong Nam-ki and BOK Gov. Lee Ju-yeol met for the first time in more than two and a half years.

The meeting drew attention as the Finance Ministry and the central bank were at odds.

While the Finance Ministry is pushing a supplementary budget that would give emergency relief grants of 250,000 won and more to all people except those in the top 20 percent income bracket, and grants of up to 9 million won to businesses affected by Covid-19 social distancing restrictions, the BOK has been signaling a "normalization" of monetary policy, meaning reining in liquidity.

The supplementary budget, which is currently proposed at 33 trillion won, the second-largest ever, is expected to increase liquidity in the market.

The BOK governor has raised the possibility of raising interest rates.

While both Hong and Lee deny any discord between the government and central bank, Hong said the government will for the time being continue with its expansionary fiscal policy and BOK Gov. Lee again emphasized the raising of interest rates.

“As the economic situation is improving, we will make adjustments accordingly,” Lee said.