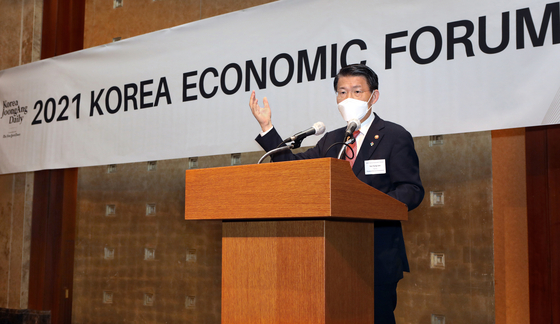 “As the Covid-19 situation continues, inequalities in incomes and education have further widened,” Eun said at a keynote speech at the Korea Economic Forum at the Lotte Hotel Thursday morning.

Such inequalities could undermine the unity and cohesion of a society, and thus any recovery from the pandemic.

“We are currently experiencing a twin crisis: the threat of the virus and economic uncertainty,” Eun said. “While Covid-19 vaccine inoculations have been gaining speed, it is still difficult to project how long this pandemic will continue and how deep the scars will be.”

The FSC chairman said that while no one knows when the pandemic crisis will end, major shifts are occurring around the world in its wake.

“When compared to the past, the economic and financial paradigm is changing direction and emphasizing the essential environment and social values,” Eun said.

The government and FSC are working hard on increasing support for those in need.

“In order to narrow the deepening polarization since the Covid-19 outbreak, we will expand our support for those in need,” Eun said. “Generally, people with low incomes and low credit scores are hit the hardest in times of economic crisis.

“Only when the regulatory system allows them to continue their economic activity will our economic sustainability rise.”

The FSC Chairman noted that starting July 7, the legal maximum ceiling on annual interest rates on loans will be lowered from 24 percent to 20 percent.

“We will continue to work on easing the burden of high interest rates for those in financially vulnerable positions,” Eun said.

He said the FSC will work on policies to boost access to digital financing for all segments of society. Online and mobile banking have surged during the pandemic.

Earlier this month, a  third online-only bank, Toss, was launched, increasing the availability of financial products including low-interest loans customers in Korea can choose from.

The FSC chairman noted that the financial authorities are easing regulations to help the financial industry innovate and offer more services, especially for people in need. It is also tightening protections of consumers against business malpractices such as fraud.

Eun said the FSC will not pull the plug quickly on some measures implemented during the pandemic, including loan suspensions.

According to the FSC, the government provided last year 175 trillion won ($155 billion) in financial support to Korean businesses and the local financial market. That's equivalent to 10 percent of the nation’s GDP.

“It is massive support that is unprecedented,” Eun said. “We have acted boldly and swiftly in offering capital for small businesses and SMEs that faced liquidity crunches.”

He said the government offered more than 1 trillion won in financial support for small businesses from an initial target of 81.5 trillion won.

Commercial banks provided enough finance to keep companies and the market from collapsing, he said, which the government considers an achievement.

“[However,] we are considering the timing of existing liquidity supply policies for the soft landing of the economy after overcoming the crisis,” Eun said.

“We will work on an orderly exit that will not be too early [but] not too late,” Eun said.

The government will gradually relax the temporary suspensions on loan payments, which will be in effect until the end of September.

Suspensions for small companies were supposed to expire at the end of March but were extended for six months.

During the economic forum, Eun promised the government’s commitment to combating climate change and in expanding so-called green finance.

“Financiers will have to take a more responsible role in selecting and supporting investments to help convert our economy to be environmentally friendly,” Eun said.

He said government financial institutions will double their financing of green areas from a current 6.5 percent to 13 percent by 2030.

Eun said the private sector is also playing its role as 112 local financial institutions have pledge to support climate-related financing.

The FSC chairman urged the cooperation of the global community in overcoming the crisis.

“It has been confirmed through Covid-19 that no individual country could overcome the virus crisis on its own,” Eun said. “Without cooperation on a global level towards carbon neutrality, the efforts of any individual country in combating climate change will be overshadowed.

“The major impact of the 'taper tantrum' on the [global] market with only a hint of a rollback of quantitative easing clearly shows how closely connected the international financial market is.”

Eun said only through close cooperation among governments, the diplomatic community and experts from home and abroad will countries grow together in this time of major change.