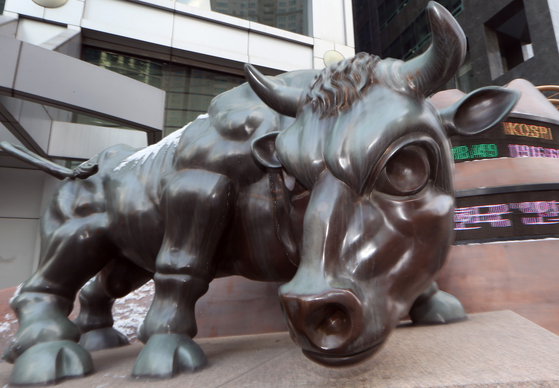 Bull statue in Yeouido, Seoul. Expectations are high among wealthy investors of the Kospi moving up this summer.[YONHAP]


Most rich people are bullish about the market, and their stock of choice is Samsung Electronics.

According to a survey by Samsung Securities released on Tuesday, 63.9 percent of 782 clients with a minimum 1 billion won ($885,000) in financial assets said they expect a “summer rally.”

The survey was conducted between June 22 and 24.

Stock often surge as fund managers increase their holdings before going on vacation.

Among those expecting a summer rally this year, 68 percent forecast the Kospi to move between 3,200 and 3,400.

The Kopsi has been breaking records since the beginning of the year when it passed 3,000 just seven days into 2021.

Some 32 percent of those polled said the Kospi could break 3,600 this summer.

Explaining their optimism, 47 percent said earnings are driving their bullishness, while 46.8 percent said it was the ending of the pandemic.

Of those surveyed, 36.1 percent are worried about interest rates and their effect on the index.

For the last three months, consumer prices have risen more than two percent year-on-year, exceeding the government’s target of keeping inflation at 1.8 percent.

Among the stocks that wealthy clients prefer to buy before taking vacation were large caps, including Samsung Electronics, SK hynix and Naver.

They were followed by fuel cell, biopharmaceutical, internet and game stocks, such as LG Chem, Samsung SDI and Kakao.

Covid recovery plays, such as Shinsegae and Hyundai Department Store, were next.

Nearly 45 percent said they would be interested in buying big tech shares, including Apple, Google and Facebook.

Major “industrial” stocks, such as Caterpillar and Boeing, which are seen turning around as the pandemic ends, were also top choices.

But only 2.8 percent said they were interests in so-called “meme” stocks, such as GameStop and AMC Entertainment.

Despite interest in overseas stock, 54.9 percent still were in favor of investing in Kospi shares.

“While there are concerns on tapering, the expectation for economic normalization and company earnings are overshadowing such worries,” said Sa Jae-hun, Samsung Securities vice president.