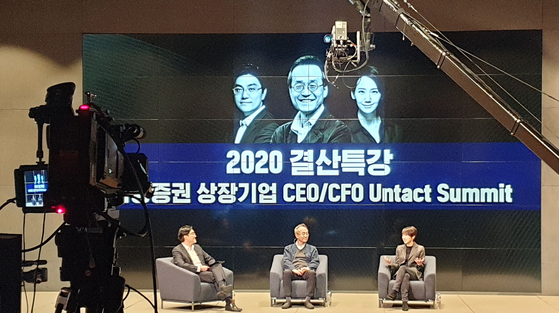 
The C-suites of Korea’s listed companies are bullish on equities and intend to increase investments in stock next year.

According to a survey of chief executive officers and chief financial officers of Korea’s listed companies by Samsung Securities, 64.6 percent of 487 participants said they want to expand investments in stock, the brokerage said Tuesday.

While real estate investment has been a preferred asset for the wealthy class in the past, only 11 percent said they would like to increase investments in real estate.

Most of the respondents said Seoul’s main bourse should remain strong next year.

Some 42.5 percent of the respondents expected the Kospi index to surpass the 2,800-mark while 16.6 percent said the index could even surpass 3,000.

Promising industries cited included semiconductors, biopharmaceuticals, lithium-ion batteries and displays, as global demand for those products are growing and local companies have shown competitive edges in those fields.

With low interest rates making bank savings unattractive investments and the real estate market being unstable due to frequently changing regulations, liquidity was concentrated on the stock market. A plunge in the stock market due to the coronavirus also prompted people to open accounts and start investing.

The number of trading accounts for the Korean stock market, including the tech-heavy Kosdaq, grew from roughly 29.3 million accounts at the beginning of this year to over 35 million accounts as of last week, according to statistics provided by the Korea Financial Investment Association. Last year only about 360,000 new accounts were opened throughout the year.

Despite the positive outlook, the coronavirus and the new U.S. administration led by Joe Biden remain risk factors to future investment, the top managers said in the survey.