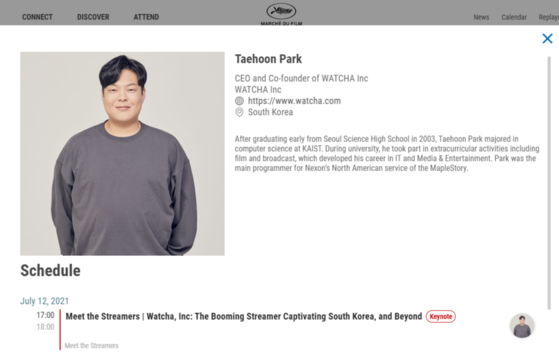 CEO Park Tae-hoon of video streaming platform Watcha has been invited to the Marché du Film, held in conjunction with the Cannes Film Festival, as a speaker. [SCREEN CAPTURE]

Film markets are events held for the business aspect of films, such as selling films to different countries or seeking a distributor.

According to the streaming platform, CEO Park Tae-hoon of Watcha has been invited to attend the film market on July 12 as a speaker to give a presentation on how Watcha found success in Korea as well as Japan, and its future international ambitions.

Park is the only official from an Asian firm to be invited to the “Meet the Streamers 2021” session. Streaming services Paramount+, Discovery+ and more will also attend the session.

The Cannes Film Market is one of the world’s major film markets along with the European Film Market — held jointly with the Berlin International Film Festival — and the American Film Market. Such events draw the attention of content industries around the globe.

Watcha was founded in 2011 as a service that offers personalized film recommendations and expanded as a streaming service in 2016. It recently started creating its original content.

“We will share how Watcha merges data and technology with the platform to expand our service,” said Park. “We will make it known that Korean content platforms have as much potential as Korean content."