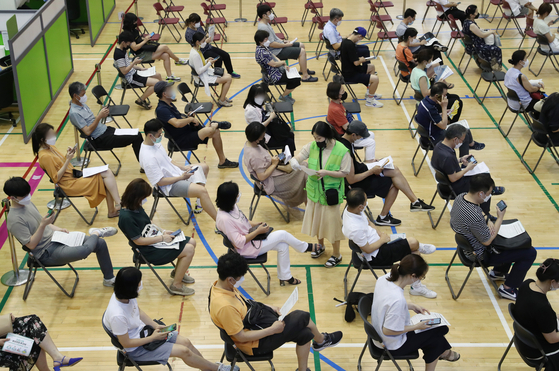 People wait for possible adverse reactions after receiving shots at a Covid-19 vaccination center in Seongnam, Gyeonggi on Monday. More than 20 million people in Korea have received at least one dose of a Covid-19 vaccine.


Korea confirmed its first two cases of the Delta Plus variant of Covid-19 on Tuesday — and both patients were fully vaccinated with the AstraZeneca vaccine.

The Korea Disease Control and Prevention Agency (KDCA) said Tuesday that the Delta plus variant was found in a man in his 40s who had no recent travel record, and in someone recently returned from the U.S.

The Delta Plus variant is a mutation of the Delta variant and it has three sub-lineages: AY.1, AY.2 and AY.3.

Delta Plus cases have been found in around 20 countries, including the U.S., Britain, Portugal, Japan and China, while the original highly contagious Delta strain has now spread to more than 130 countries.

The first Delta Plus patient, infected with the AY.2 sub-lineage, took a Covid-19 test after experiencing symptoms and was declared positive on July 26.

He completed his AstraZeneca inoculation in mid-May, according to the KDCA.

Out of 280 relatives and colleagues who have been in contact with the man, only his son tested positive.

“We are investigating the possibility of prior infection through exposure in the local community,” Park Young-joon, head of the epidemiological investigation team at the KDCA said in a briefing on Tuesday.

The son's symptoms occurred earlier than his father's, but it could not be confirmed whether the son is infected with Delta Plus.

The second Delta Plus patient, infected with the AY.3 sub-lineage, tested positive after returning from the U.S. on July 23. The patient was administered two doses of the AstraZeneca vaccine in Korea before leaving the country, the KDCA said.

“Since [the Delta Plus variant] has only been confirmed in a few cases, it is difficult to say that there is a higher possibility of a breakthrough infection,” Park said.

Some scientists warned the Delta Plus variant may be even more transmissible than the Delta variant, but the U.S. and the World Health Organization (WHO) haven’t labeled it a variant of concern, medical terminology for a more dangerous strain.

"We should be vigilant about the Delta Plus variant, but it's not something to be overly concerned about in advance,” Park of the KDCA said. "There have been no cases found in the U.S. Mexico, Britain or in Europe where Delta Plus had different aspects than the previous Delta variant.”

Infectious disease specialists stressed the country should focus on vaccinations to prevent breakthrough infections and the spread of new strains in the community.

“Although there is not much data, I believe the Delta Plus and the Delta variant are not much different,” Chun Eun-mi, a professor of respiratory medicine at Ewha Womans University Mokdong Hospital, told the Korea JoongAng Daily.

“The government should consider more mix-and-match vaccinations with mRNA-based vaccines to prevent breakthrough infections, as the Delta variant has a high rate of reducing neutralizing antibodies of Covid-19 vaccines, especially the Janssen vaccine,” Chun said.

Chun continued, “While vaccines were previously administered to create herd immunity, they should now be used for individuals to reduce the possibility of severe illness or fatality.” 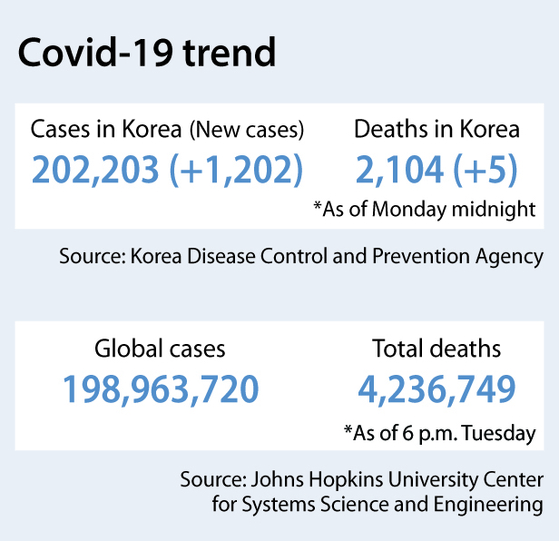 Virus deaths rose by five, bringing the death toll to 2,104.

The proportion of the Delta variant in local Covid-19 infections in the previous week — from July 25 to 31 — came to 61.5 percent, sharply up from 48 percent a week earlier, the KDCA said.

Reflecting the latest virus risks in the country, the United States on Tuesday raised its travel advisory for South Korea to the second level of the four-tier system, which advises Americans visiting the country to exercise increased caution.

“Unvaccinated travelers who are at increased risk for severe illness from Covid-19 should avoid nonessential travel,” the agency wrote.

The change came just two months after the CDC put South Korea on its list of destinations with the lowest Covid-19 risk, or Level 1 on June 8.