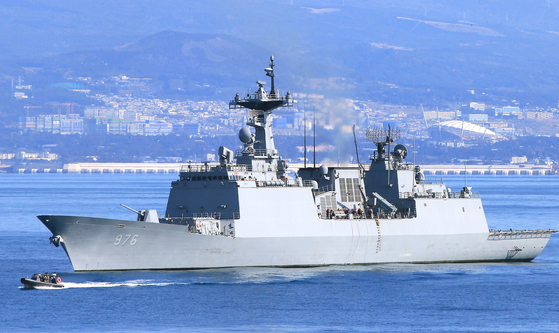 A file photo of Munmu the Great. [YONHAP]


The Ministry of National Defense said Friday that it will bring back next week a naval unit dispatched to eastern Africa for a peacekeeping mission, following a cluster infection of Covid-19 on the ship.

According to the ministry and the Joint Chiefs of Staff (JCS), two KC-330 Cygnus multipurpose tanker airplanes will be sent to the Gulf of Aden to airlift crewmembers.

“We urgently requested cooperation from some other governments because our military aircraft will enter their airspaces,” said a military source. “Due to this, the departure date of the planes is not finalized yet, but we will send them as soon as possible.”

The measure is in response to a cluster infection reported on the Munmu the Great destroyer of the Cheonghae unit. After an officer was transported to a hospital in a nearby country with symptoms of pneumonia, six people aboard the ship who were in close contact with the officer tested positive for Covid-19 on Tuesday.

Another 80 have been placed in isolation.

None of the Cheonghae unit crewmembers are vaccinated, as they left in February, before the military started inoculations.

According to the military source, all 300 members of the 34th contingent of the Cheonghae unit will return home aboard the planes. The contingent was originally scheduled to hand over its peacekeeping and anti-piracy mission to the 35th contingent next month. The 35th contingent, aboard the destroyer Chungmugong Yi Sun-sin, left for the Gulf of Aden last month.

The 34th contingent will be the first team to abort its mission since the Cheonghae unit was established in 2009. The Korean troops are rotated every six months.

The military will also send a team to sterilize the Munmu the Great, and sail it back to Korea. “A captain-level commander and the minimum number of sailors required to operate the ship will be sent to bring it back,” the official said.

The distance between Korea and the Gulf of Aden is about 9,500 kilometers (5130 nautical miles), which requires more than 25 days of sailing.

Captain Kim Dong-rae, the commander of the 34th contingent, told family members of his crew on Thursday that the military is discussing an airlift plan for an early return. “Tentatively, it will be sometime next week,” he said.

“Health authorities from a nearby country boarded the ship and conducted tests on all crewmembers,” said a JCS official. It takes 24 hours to get the results, but it may take longer, taking into account the situation in the African country.

According to the official, the condition of the officer who was admitted to hospital is improving.

Most of the 80 sailors placed in isolation on the ship are showing minor symptoms, but five will require further medical treatment, the official said. They have high fevers and muscle pain.