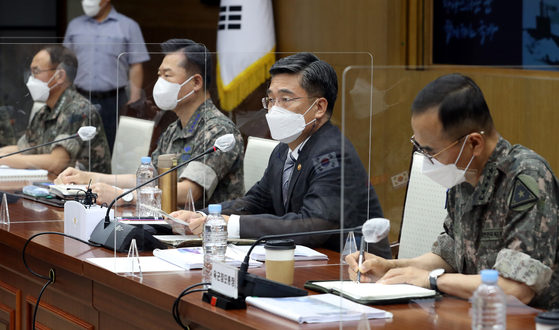 
Defense Minister Suh Wook is "terribly ashamed" about sexual harassment allegations that led to the arrest and suspension of a brigadier general.

Suh made the comment Wednesday during a meeting at the Defense Ministry in Yongsan District, central Seoul, with top military brass to discuss the security situation on the Korean Peninsula.

The defense chief vowed to "sternly punish" the accused brigadier general and make an example of him as part of efforts to stamp out such behavior after the suicide of a female Air Force officer who also reported sexual abuse.

The one-star general is accused of forcing unwanted physical contact upon one of his female subordinates after a work dinner. The victim reported him on June 30, and he was suspended and arrested Friday.

The public was outraged over the suicide of the Air Force officer at the end of May, three months after suffering sexual harassment and reporting it to military police. No action was taken against the perpetrator while the victim was still alive.

Her family's petition on the Blue House website, which urged an investigation into her death and sexual harassment complaint, has gotten over 217,000 signatures. The suicide led to the resignation of Air Force Chief of Staff Lee Seong-yong and sparked a presidential probe into the force's handling of the case and allegations that military authorities attempted a cover-up to protect the perpetrator.

Two days after the female officer's suicide, the force was roiled by allegations that female Air Force members were secretly filmed without their consent by a male military policeman and that the unit again failed to take action to protect the victims.

In his comments on Wednesday, Suh said, "I feel terribly ashamed and regret that the military's ability to reform itself is questioned due to a general's sexual harassment case at this critical time when we are trying to meet the public's expectations.

"I will issue a stern punishment in this case as a warning to others. I will show that anyone who misbehaves and undermines military discipline will not be able to avert a severe punishment," he vowed.

The meeting was attended by Joint Chiefs of Staff Chairman General Won In-choul, as well as the chiefs of the Army, the Air Force and the Navy.

In addition to addressing the most recent sexual harassment case, Suh called for improved living conditions in barracks for young soldiers.

In recent months, the military has come under fire for sub-standard meals and poor living conditions for soldiers, particularly for those in isolation due to exposure to Covid-19, following a series of public posts on social media by service members and their families.

"I believe that every one of us will devote our effort and passion to ensure that the military can become a strong and trusted organization grounded in justice and human rights," Suh said.